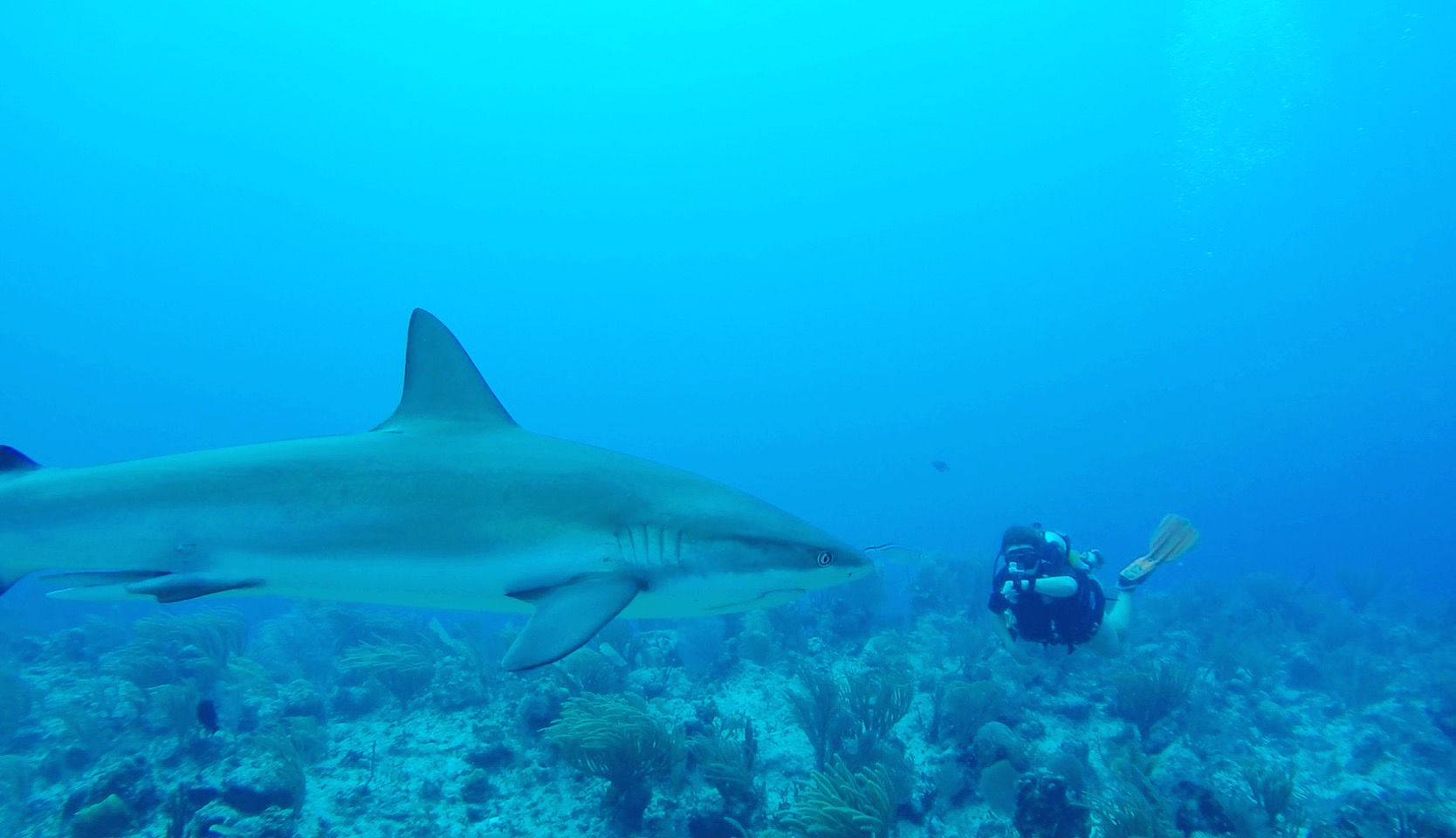 My brief take on the global impact of the human-shark relationship.

“Your life is inextricably linked to that of a shark whether you choose to accept it as your truth or not.”

I recently got a puppy. You may ask what this has to do with Sharks. Not much unless you count the fact that he will soon be donning a shark fin life-vest when we patrol the ocean. A recent incident with puppy however got me onto the subject of my article. The two of us were hunting for coconuts in my garden and at one point I hooked a coconut and pulled it down. I shouted “move!” but Puppy being a puppy and not yet fluent in the English language did not artfully step aside as I expected and nearly got in the way of a crashing coconut.

“More humans are killed each year by falling coconuts than by Sharks.”

Sound familiar? This little urban legend gained momentum after a publication by a shark expert in 2002 cited “human death by coconut” being at over 150 annually and way higher than recorded fatalities from shark bites over the same period. While this makes for entertaining google fodder it does appear to be lacking in hard scientific evidence.

A source I deem a tad more accurate is the data published by the International Shark Attack File (“ISAF”), an organization which investigates incidents involving shark-human interaction. In 2017, 155 cases of both provoked and unprovoked shark attacks on humans were investigated globally of which only 5 were fatal. (a whopping 53 of the 155 cases recorded occurred in US waters, surprisingly no mention yet of a giant wall to keep sharks out.)

Why am I focusing on shark attack statistics in an article aimed at conservation? Well, because in my opinion, negative public perception is the greatest challenge that sharks and shark conservationists need to overcome if we have a hope of saving the species. Whether sharks are being killed by willful persecution, ambivalent economic prosperity or just plain ignorance, the fact remains that, globally sharks are being wiped out at rates that (should be) alarming to any person with even a basic understanding of ecology.

Sharks have been on this Earth for over 450 million years. They have survived each of the five preceding major mass extinctions but may not survive the sixth which incidentally we are facing as you are reading this article.

If google is to be believed it is estimated that humans kill about 100 million sharks annually. If you factor in population decline due to habitat loss or ecosystem degradation, the number of human induced shark deaths rises dramatically.

The most recent shark fatality in the Reunion Isles (which at 2 human deaths accounted for the highest concentration of fatalities in 2017 per the ISAF list) lead to 11 time world surf league champion Kelly Slater calling for a daily cull on sharks, a statement which he instantly retracted due to public outcry. Per an article in “Surf Europe” however his validation had already ignited embers smoldering under the surface within the community and the next day saw a fire bomb attack on the offices of the marine reserve and a spate of death threats against conservationists in the area. Shark hunting and certain other commercial fisheries have been closed on the island since the opening of the marine reserve. The tragedy provided the weapon. The motive was always there.

The existence of marine reserves and anti-shark fishing laws in place on islands such as Reunion (and Cayman) shows how far we have come and the leaps and bounds made by global organizations such as CITES and Wildaid in altering public perception needs to be acknowledged.

Per a Wildaid survey done in 2016 on Chinese residents, shark fin consumption had declined by 80% since the first survey done. 93% of participants had not eaten shark in last 6 years and 80% attributed it to the messages spread by the Wildaid anti-finning campaign.

I have no insight into the sampling method used to be able to say whether or not the results from that survey could be projected to the population as a whole. Whilst I would be surprised if that study was representative, the fact that such results can be obtained in Asian markets is still in my opinion a huge win for conservation as is every new species added to the CITES “Protected species” list.

A species can be listed as threatened per the IUCN Red List but that doesn’t automatically result in protected status. In order to achieve “Protected” status a lot of information is needed about a species and it needs to be demonstrated that it is in our best interest to protect.

And this is why research done by shark biologists is so vital.

The science is not merely a means to stave the scientist’s curiosity. It serves a grander purpose.

I titled this article tipping point because I believe we are constantly at a tipping point as it pertains to the health of our oceans and planet and whether we can bring the populations of threatened shark (and other) species back from the brink of extinction remains to be seen.

However if you are of the view that we are too late, I implore you to think differently. There is always something worth saving. But it will not be possible if the masses turn a blind eye.

So if you are still reading at this point I thank you, and please check back here on Friday for my article about Shark Conservation Cayman and see how you can get involved.

Further if you have not already I would strongly recommend watching “Sharkwater”  and “Racing Extinction” two very powerful films. For those residing in Cayman, we are screening “Sharkwater” tomorrow night at the seaside cinema. See our Facebook page for more details.