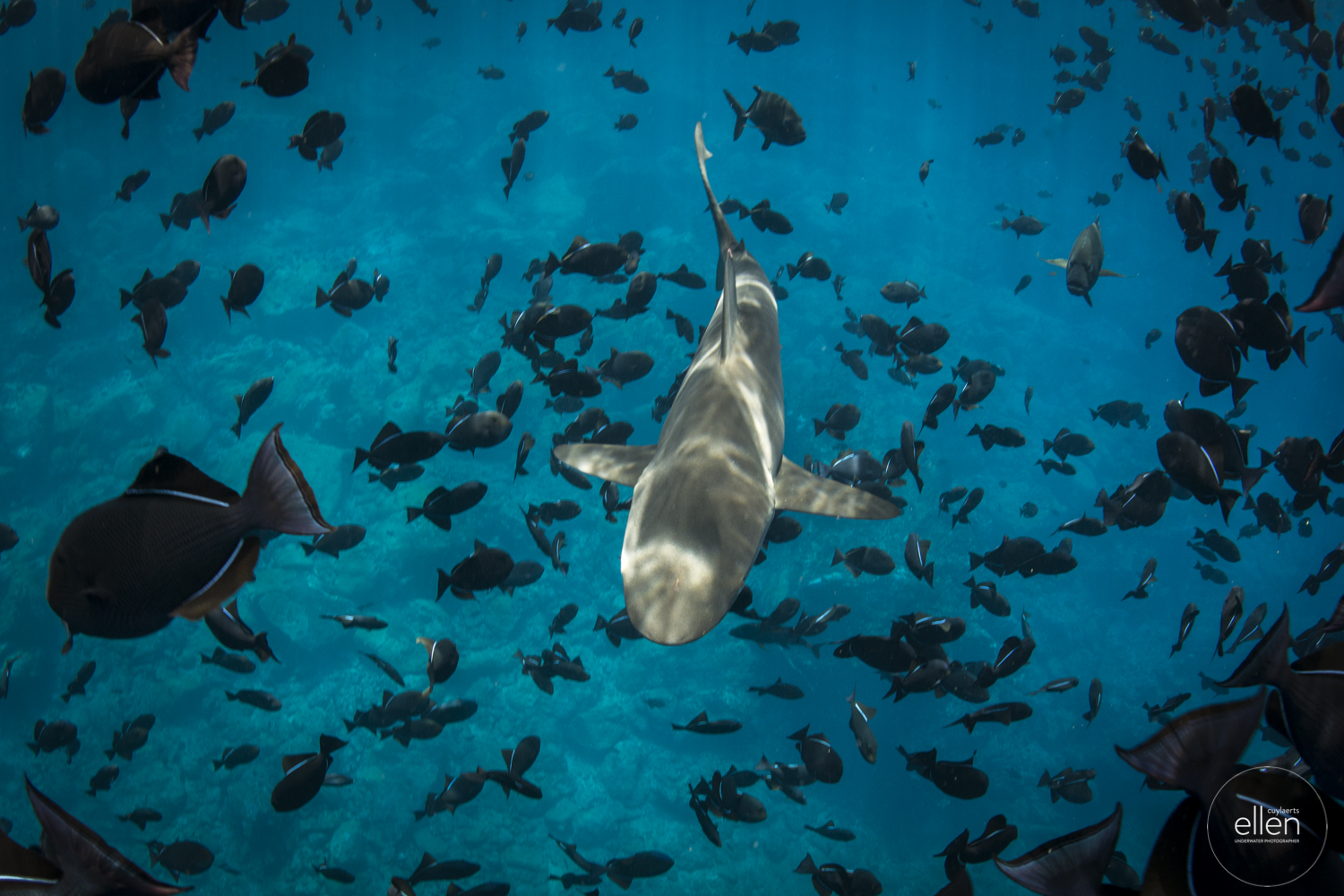 One of my personal heroes is Ellen Cuylaerts.  I have great admiration for Ellen’s ocean conservation efforts.  She is a true luminary.  Ellen faced her fears and learned how to dive and swim with sharks.  By embracing her fear, she gained a deeper love, respect, understanding, and appreciation for sharks.  It is her bravery, and curiosity to learn more about our ocean and sharks that teaches us we can all do great things if we stay true to ourselves and follow our passions.  Ellen’s tremendous love and dedication to shark conservation are evident in her underwater photography.  She uses her passion for photography to show sharks in their natural habitat.  Her photos not only capture incredible ocean moments and encounters with one of the world’s most fascinating creatures, but they tell a powerful story.  Sharks are incredibly misunderstood creatures, resulting in them often being feared.  Through her photography, Ellen strives to change the perception of sharks by reminding all of us that sharks are not to be feared, but respected.  They play a vital role in maintaining the balance of our oceans ecosystems.  Likewise, healthy shark populations are an indicator of healthy coral reefs.  The ocean has a delicate and intricate balance, and we need healthy shark populations to ensure the future of a healthy ocean.  We can all do our part to contribute to shark conservation and raising awareness about the importance of sharks.

1. What inspired you to be a shark and ocean conservationist?

I became an ocean conservationist because I was grateful for all the ocean is giving us; the calm just looking at the waves, the serenity being in water, the healing benefits of the ocean, the oxygen produced in it…and yet we hardly take care of her and all life in it. We take the ocean for granted, pollute it and damage all life. When I became a snorkeler and later diver and shared the ocean with my children, they reconnected me with nature and taught me lots about fish and sharks, marine mammals and creatures from the deep.  Sharks fascinated me but I had a healthy fear, I wanted to know all about their behavior before I would enter their proximity….but one of my first dives I was lucky and saw 3 sharks and they stayed close during the whole dive. What I experienced was no fear but an immense calm that came over me: these were magnificent creatures, misunderstood, not looking at us as if we were food but just observing us like we observed them.

I wanted to know more and read about the different species and different behavior and feeding patterns, already aware their numbers were dwindling due to the cruel act of finning and them being the victims of bycatch too. I wanted to take images of them the way I saw them, as not to fear but admire for the important role they play in our oceans as apex predators on top of the food chain, keeping the reefs healthy. My shark shots (of reef sharks, oceanics whitetip sharks, tiger sharks, whale sharks, Galapagos sharks, silky sharks, blue sharks, nurse sharks, tresher sharks and hammerheads) are all with their mouth closed, peaceful and serene, showing the beauty and informing people why exactly they are so important.

2. What is your favorite species of shark?

Ahhh difficult question. I love them all, the skin, their ampullae of Lorenzini, their eyes, fins, tails: so different for every species and yet so alike. Maybe the tiger shark is my favorite because of its size, the stripes and the way it slowly and gracefully moves but then again, they all do. Maybe it’s easier to choose my favorite time in the water with sharks: that was on Ascension Island where  I spent hours and days in the water with juvenile and adult Galapagos sharks. The juveniles stayed close to a rock, boatswain Bird Island, a seabird breeding colony, waiting for chicks to fall in the water so they could feed on them. the water was crystal clear, jacks and black durgeons everywhere, the occasional visit of turtles and mahi-mahi…it was just paradise and heaven all together. Pure and wild!

3.  What was your first experience like swimming with a shark?

As mentioned it was on one of my first dives and it was a true eye-opener that they had a calming effect on me and they were not to fear as long as you know what to do and what not to do.  Sharks do NOT feed on people. Almost every shark incident can be explained as a shark mistaken a human for it’s usual prey.

4.  What can people do to help protect sharks?

Use your voice to protest against shark finning and killing of sharks. Shark numbers are decimated the last decades and almost all species are either vulnerable or threatened with extinction.

Sharks get killed for their fins (to produce shark fin soup) for their skin, for the medicinal use of their cartilage, as bycatch in commercial fishing. Between and 70 million and 100 million sharks are killed every year, those are the estimates, could be lower, could be much higher.

Stop eating fish, for every fish we eat, the amount of bycatch is mind-blowing, we are depleting the oceans for our convenience without thinking, without conscience.

5.  What do you love most about sharks?

I love them for keeping the oceans healthy and diving with them I absolutely love their predictable patterns and how well you can read the different characters once you spend more time with them.

6. What do you think is the biggest misconception about sharks?

That they are men eaters….they are NOT. I once did a shark feeding course to better understand them and to ’shark myself’ with the amazing Cristina Zenato. I had fish in a tube and was standing between 25-40 sharks and I’ve never been so calm.

7. What is the most interesting fact you know about sharks?

It might not be the most interesting fact but it’s something not everyone realizes: sharks are more vulnerable to stress than we think. Even tagging sharks for research or catch and release sharks in sport fishing might have an increased lactic acid build up in the blood as a result and cause a delayed mortality. It’s not because the sharks swims away after the facts that it will live on.

I read a lot of B..S of people pretending to protect sharks (but commercially sell tagging trips and even offer catch and release)…it’s sadly all about greed and ego!

Wishing everyone a great shark week!