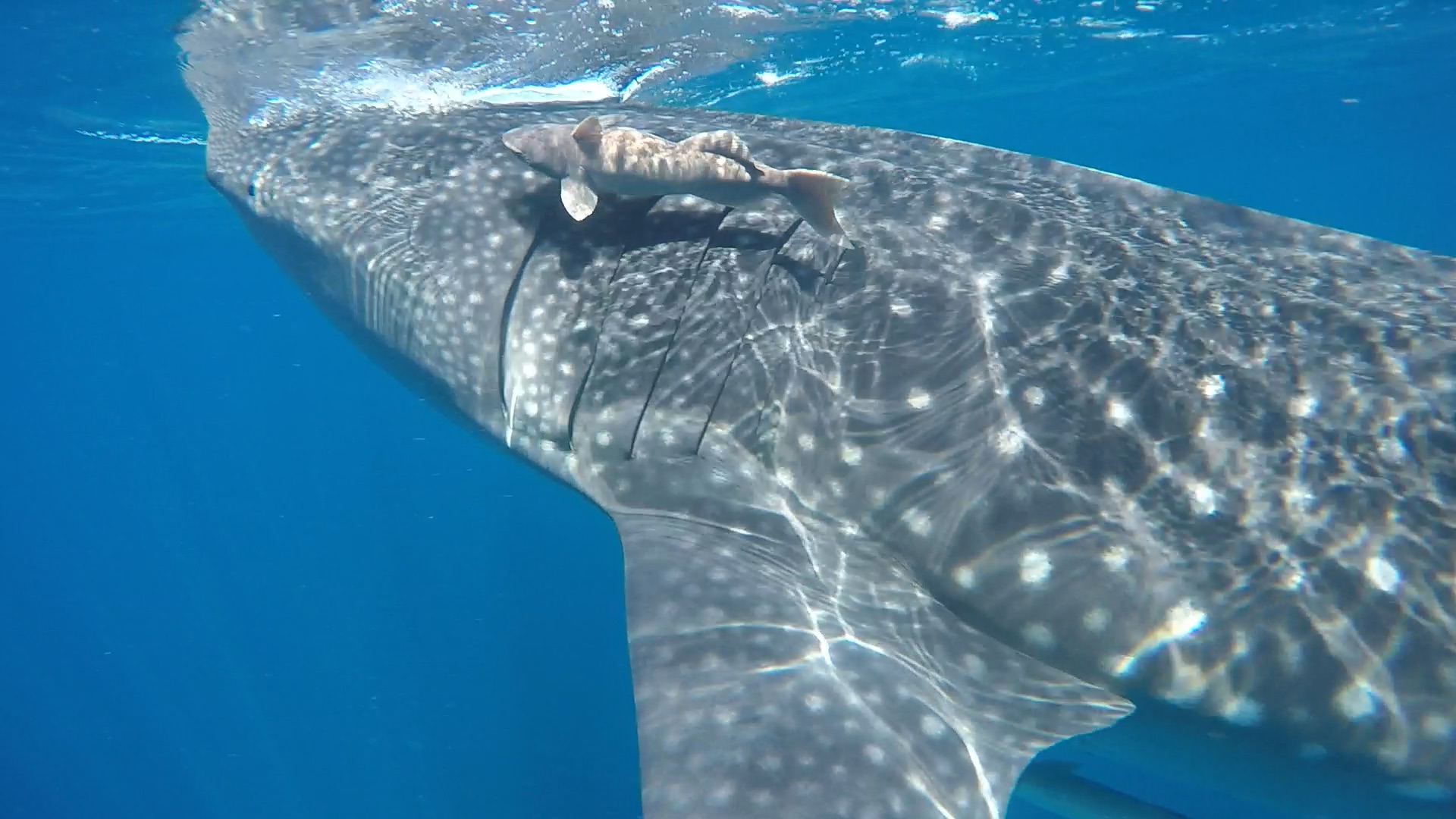 Personally, whale sharks are my absolute favorite shark species.  It is an incredible privilege to see them in all their glory in the wild.  For some of us, the opportunity to swim with a whale shark is once in a lifetime.  They are fascinating and docile creatures.  They reach an impressive size, up to 14 meters making them the largest fish in the ocean.  Whale sharks are considered to be gentle giants of the sea.  Their mesmerizing distinctive pattern is thought to aid camouflaging in their environment and is a unique, identifying mark like human fingerprints.  There is still so much to learn about Whale Sharks.  On that note, today we are featuring Ocean Conservationist Louisa Gibson from Guy Harvey Ocean Foundation to learn more about their team’s research studying the behaviors of Whale Sharks in Isla Mujeres, Mexico.

Guy Harvey Ocean Foundation and Guy Harvey Research Institute have partnered with a research group in Isla Mujeres, Mexico called Ch’ooj Ajauil to tag whale sharks with SPOT (smart position or temperature) tags. This type of tag allows us to track the animals in near real time by sending a satellite ping when the dorsal fin breaks the surface. Whale sharks are the largest fish in the sea, and inhabit tropical and temperate waters around the world traveling huge distances. Between May and August every year, hundreds of whale sharks aggregate off of the Yucatan Peninsula in response to a species of tuna spawning in the deep sea. This is the largest known aggregation in the world; it attracts thousands of tourists every year to experience swimming with the sharks, and is the perfect opportunity for us to gather scientific data on the species. Once the sharks leave this aggregation, we have no idea where they travel to and why. If we can learn more about their migrations, we can protect them from threats such as ship strikes and commercial fishers. We also aim to identify their key habitats, such as breeding grounds and nursery sites.

How would you describe your experience swimming with Whale Sharks?

If it isn’t on your bucket list, I highly recommend adding it towards the top, right now. The experience is surreal, its magical! You jump in and have to move fast, because their movements are misleading. It looks like they are swimming slowly but their massive tails propel them through the water quite quickly. They aren’t bothered by having people swimming alongside them, as long as you don’t touch them. If you are lucky enough to witness a “botella,” which is when the shark floats vertically as it gulps in gallons of water to feed on concentrations of fish eggs and plankton at the surface, you suddenly share the trans-like state that the shark is in. You feel so small in the vast ocean, next to this giant graceful animal. It’s really quite a moving experience and it makes you appreciate how incredible our ocean is.

What was the aim for your Whale Shark research?

GHOF, GHRI and Ch’ooj Ajauil aim to learn about the whale sharks migrations to identify key habitats and behavior in regards to breeding, feeding and traveling in order to protect them in the open ocean. Very little is known about the whale sharks reproductive behavior, and where they breed and give birth is currently a  mystery. So far 10 whale sharks have been tagged, 4 of which were tagged last year and all travelled in different directions only to return to Isla Mujeres a year later. Others,  tagged this year are still enjoying the rich waters off the Yucatan Peninsula as we speak. The more animals we tag, the more likely we will be able to identify patterns in behavior between males and females, adults and juveniles. To follow our tagged sharks visit GHRItracking.org, or to contribute to this research visit GHOF.org.

What do you find most fascinating about Whale Sharks?

There are so many fascinating things about whale sharks! They are the largest fish in the sea, however feed on the smallest (eggs, plankton, small fish). The white patterns on their dorsal surface are all totally unique, like our finger prints, and can be used to identify individuals. They are from the order Orectolobiformes, otherwise known as “carpet sharks” which typically live near the bottom of the sea, yet whale sharks also feed at the surface. Other examples of Orectolobiformes are the nurse shark and the wobbegong. Some whale sharks in the Caribbean region have an intrinsic pull to the Yucatan at the same time every year – how do they know?!

What do you think people would be interested to know about Whale Sharks?

They are filter feeders so technically don’t need teeth but they actually have rows of hundreds of tiny teeth, just like other sharks. Almost nothing is known about whale shark reproduction, however over 300 embryos were found inside a pregnant female in the 90s. The embryos were in all stages of development, and when 29 were genetically tested, all had the same father which could mean that this species can store sperm from one mating event and fertilize their own eggs later on. Incredible stuff!

Also, they are harmless sharks making them very fun to swim with.

Can you share a bit about GHOFs shark conservation efforts?

GHOF and GHRI focus on the research and conservation of a number of different shark species including the mako shark, tiger shark, oceanic whitetip, silky shark, and the whale shark which are studied predominantly out of Cayman Islands, Maryland and Mexico. Since the Guy Harvey Research Institute was established in 1999 we have reached some significant milestones in shark conservation. In 2006, scientists at GHRI identified that up to 73 million sharks per year are killed in the shark fin trade alone, sparking international concern about the plight of sharks. More recently GHRI discovered, through fisheries-independent data, that mako sharks are harvested 10 times more than previously thought when 30% of tagged sharks were killed. This led to emergency protections for the species in the NW Atlantic; and data from our shark research also influenced the complete protection of sharks in the Bahamas and the Cayman Islands.

Check out Jessica Harvey’s Expedition Notebook series for bite-size learning about the whale shark and other cool species!