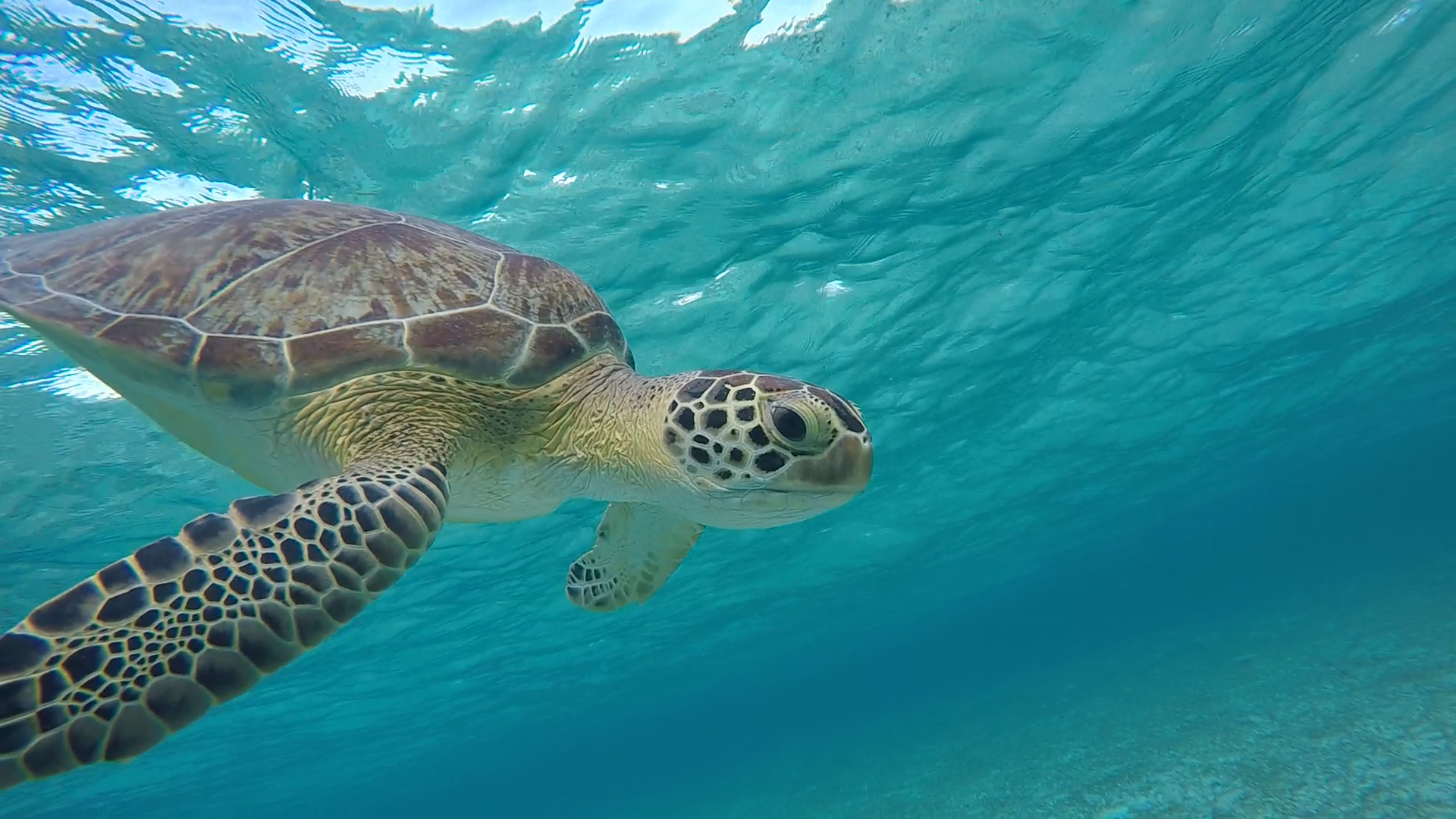 The Cayman Islands was originally named “Las Tortugas” in 1503 by Christopher Columbus, due to the abundance of turtles found in our waters.  Five hundred years later, turtles are still one of the most beloved and iconic animals in the Cayman Islands.  There are three species of turtles that can be found in the Cayman Islands: the critically endangered Hawksbill Sea Turtle, the endangered Green Sea Turtle, and the vulnerable Loggerhead Sea Turtle.  Sea turtles are a strong symbol for the Cayman Islands and need support through protection and conservation.  That being said, during Turtle Nesting Season it is vital that turtles and their nests are kept safe and not disturbed, so that hatchlings (baby turtles) are able to make their way to the water.

Some simple ways the community can help protect turtles during nesting season include keeping the beaches clean of litter and keeping nesting beaches dark and safe for turtles. Homes in popular nesting areas are asked to keep blinds closed and to use ‘turtle friendly lighting.’ This attractive amber lighting meets the needs of beachfront property owners without disorienting baby turtles and causing them to crawl away from the sea.  Beachfront residents can also remove beach chairs and watersport equipment off the beach, when not in use, to avoid creating obstacles for the nesting females and hatchlings.  In the event that you come across a turtle nest, or are looking for more information on turtle friendly lighting, you can contact the Department of Environment (DoE) at 938-NEST (938-6378) or doe@gov.ky.

Turtles, like all marine life, depend on healthy oceans and ecosystems.  In order to help increase their chances of survival it is vital that we all do our part to keep our oceans free of plastic, as plastic in our oceans has become an increasing problem.  Ingesting plastic is harmful to all marine life, and turtles can easily mistake a plastic bag for a jellyfish.  According to 4Ocean, “It’s estimated that over half of all sea turtles have ingested some form of plastic” (https://4Ocean.com/).  Also, removing ghost nets and recycling fishing line is just as important, as turtles and other marine life can easily become entangled which can be harmful and even in some cases, fatal.  For a list of fishing line recycling bin locations, see http://doe.ky/marine/fishing-line-disposal/.

What inspired you to become a volunteer with DoE Turtle Team?

TD: Since I arrived on island I have always loved snorkeling with turtles at Spotts Beach, or have been really excited when one shows up during a scuba dive.  One morning at Spotts beach I met Lorri and Paul (both part of the DoE Turtle Team) processing a nest on that beach.  They were both so keen to educate me and other onlookers as to what they were doing and I was fascinated!   I believe that in Cayman we are so spoiled with turtles that we take it for granted.  It’s great that I get to see turtles every weekend, but I wanted to do something more to ensure the conservation of these animals, so that any visitors to this island get to share in this experience for many years to come.

What is a typical day like looking for turtle tracks and nests?

TD: I walk the beach twice a week looking for turtle nests.  The stretch of beach I walk was allocated to me by the DoE Turtle Team, and I walk on the same two days of the week that they “work” those beaches to record and process any nests.  I am usually on the beach by 06h15, as I have to have my report through to them by 07h30. Some nests (especially a fresh green turtle nest) are REALLY obvious to spot- the up and down tracks in the sand, as well as the massive hole, next to a pile of soft powdery sand.  If a nest is a few days old, the tracks have usually been walked over by people on the beach, and the hole is less pronounced, and that becomes more of a challenge.  Kids building sand castles, dogs digging holes, and people dragging paddle boards on the sand all complicate things even further, and this also leads to false reports of nests – but the DoE Turtle Team checks all reports to confirm whether a turtle laid eggs.

How do you help protect the turtle nests that you find during your patrols on the beach?

TD: Great question!  Actually the most important part of my walk is making sure that I find ALL of the nests, as the DoE Turtle Team comes directly to the nests that I call in. This means that if I miss a nest, so do they, and that has implications for research, as well as survival of the unhatched turtles.  In the event of a big storm hitting our coast, the team is able to go directly to nests and relocate them if the waves are getting too close to them. If they don’t know about a nest, they cannot relocate in such an event.  Also, when it is close to hatching time, the team tries to encourage resorts/houses overlooking that beach to turn off lights to limit mis-orientations (when the babies crawl towards the lights instead of the sea).

Interestingly, the eggs are laid deep enough in the sand that even if you were to walk over a nest you would not crush them (although please don’t go do that!).  After the Turtle Team is done processing a nest, they will rake over the tracks and fill the hole, so you wouldn’t even know it was there.  This also helps prevent the same nest being re-reported after they have processed and logged it.

Are there particular beaches that are more popular for the turtles to make nests?

TD: Definitely!  And this also varies between species of turtle. Unfortunately, I would prefer it if you don’t publish which exact beaches are more popular (and you will see my pictures never show obvious landmarks) because I would hate to encourage poachers to come to these specific spots.

What are some of the dangers turtles face during nesting season?

TD: People!  When these turtles come up on the beach they are very slow moving and are like sitting ducks, and this is when most poaching happens.

Also, adult turtles mating in the water are often tormented by snorkelers which can disrupt the breeding cycle.

Once babies hatch, lighting from the street or from houses/condo complexes disorientate thousands of hatchlings a year in Cayman. When they emerge, they instinctively crawl towards the moon light reflecting off the water.  When there is a brighter light on the land side, they crawl towards that, where they cross the road/get eaten by land crabs/dehydrate when they don’t reach the water by sunrise- all of these are horrible ways to die, and are all completely avoidable!

How can the public help keep turtles and turtle nests safe?

TD: Firstly, report any actual or possible turtle nesting activity to the Turtle Hotline (938-NEST / 938-6378). It is really helpful if your report is as detailed as possible, and if you can include pictures with landmarks in the background that is even better!

Also, please report any suspicious activity or poaching to DoE Conservation Officers at 916-4271 or to 911. Each year the team and DoE enforcement officers prevent multiple poaching incidents through tip offs from the public.

Lastly, do not interfere with nests or hatchlings, and respect mating turtles.

How many eggs are laid and when will the eggs typically hatch?

TD: This varies between species and turtle to turtle, but a typical clutch is between 100-150 eggs per season.  A female lays 5-7 times per season, and this alternates year on year ie the females laying in 2019 will be back on our beaches in 2021 -or even later.  (Typically, 2-4 years.). Eggs usually incubate for 45-60 days before hatching.  Interesting fact is that the temperature inside the nest determines the amount of time for the nest to hatch and the sex of the hatchlings.

Are the baby turtles left to make their own way into the wild?

TD:  Correct.  After the female lays her eggs, deep in her dug-out egg chamber, and still covers that with a pile of sand, she leaves and does not return to check on or defend her eggs or babies.   After all of the babies hatch and there is enough movement and energy inside the nest, they “erupt” out of the sand and then scurry off to the water.

TD: Female turtles will always return to nest on the beach that they hatched on. Even more interesting is that the resident turtles you snorkel with in Cayman do not nest here.  Through genetic studies, we know that our juvenile turtles come from across the Caribbean, and through satellite tracking, we know that our nesting females actually live in Mexico, Belize, Honduras, and other Central American countries when they are not nesting!

How can the community get involved?

TD:  I think there is loads that people can do.

The team is always looking for volunteers to walk the beaches and look for nests (reach out via the hotline number to get more information on this).

People that live on or close to known turtle nesting beaches should be changing to turtle friendly lighting, or questioning their strata/landlord whether their exterior lights are turtle friendly.  Thankfully this is the norm for many new developments, however getting existing developments to change over has been really tough.

Lastly- simple life choices like recycling, avoiding single use plastics, and being involved in beach clean ups is all part of the cause! It breaks my heart to be snorkeling with turtles and see plastic in the water, because they do eat it, and it will eventually kill them.  Local eco-friendly groups like Plastic Free Cayman and Protect Our Future also organize multiple events on the ground in Cayman, and spread a really positive message about the environment in general, so I would encourage people to get involved in their initiatives.  Cayman is such a small island that you as an individual can make a difference!