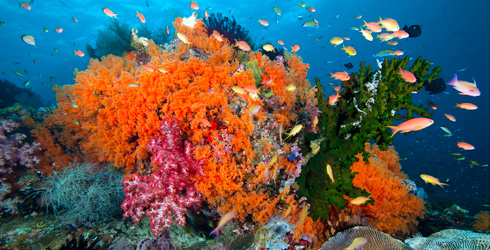 The Coral Triangle is rich in diversity and home to iridescent corals, fish, marine plant species and crustaceans. Additionally, it is home to twenty-two species of dolphin and endangered dugongs.

The Coral Triangle is considered to be the underwater equivalent of Amazon Rainforest.  The reason being, the Amazon comes as a close rival to the Coral Triangle in terms of species richness.  Essentially, the Coral Triangle, is a hot spot for marine life, as it is home to an astonishing amount of marine species, more than anywhere else.  It is massive, spanning across the ocean, encompassing an area that is half the size of the United States.  This incredibly beautiful and rich in diversity, habitat is an underwater wonderland.  Unfortunately, this incredible are of coral reefs faces a variety of threats, including, pollution, climate change, and unsustainable fishing.  As a result, these threats are inflicting negative effects upon this precious eco-system, such as the degradation of the Coral Triangle.

Climate Change and it’s impact on the Coral Triangle

One of the primary threats the Coral Triangle faces is climate change. Climate change greatly affects the eco-system of the Coral Triangle. With a rise in the temperature of the ocean, and the increase of ocean acidification, results in coral reef bleaching and endangering the marine life that resides in the Coral Triangle. Coral reefs and marine life are extremely vulnerable to the negative impacts brought on by climate change, in particular, ocean acidification. Essentially, the ocean is absorbing CO2 release into the atmosphere, due to the usage of fossil fuels. Thus, “CO2 alters the ocean’s pH balance, which makes it more acidic and toxic to some marine organisms.” (World Wildlife Fund) Ocean acidification poses a serious problem for coral reefs, such as disrupting their ability to form hard skeletons.

Conservation Of The Coral Triangle

Overall, we can all play a role in helping with the conservation of the Coral Triangle. We can do simple actions and help make a difference. For instance, we can support World Wildlife Fund and other environmental organizations in their efforts to protect a marine treasure, such as the Coral Triangle.  If everyone works together to keep our oceans healthy, the Coral Triangle, and planet as a whole will greatly benefit.