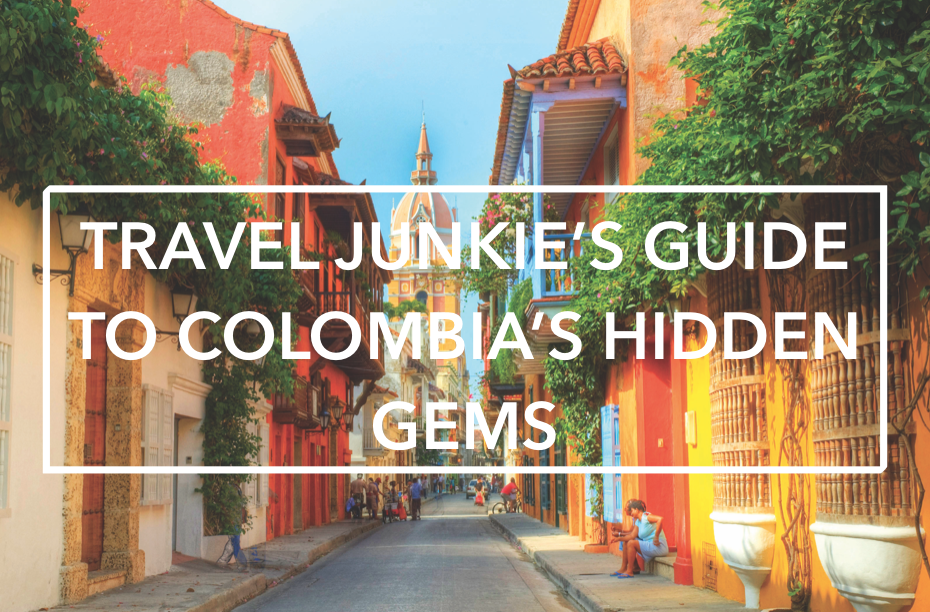 Today’s Wanderlust Wednesday feature is by Michelle Lockwood, a world traveler and environmentalist currently based in the Cayman Islands.

Recently voted number two in the Lonely Planet’s must see countries of 2016; Colombia is gaining much more positive attention than it used to and with direct flights from Miami to numerous cities it is now incredibly easy to reach. Often having been associated with cocaine trafficking and the violence led by drug lord Pablo Escobar in the 1980s and 1990s; its reputation has long hindered its growth as a tourist destination, but in the recent years there has certainly been a resurgence of the beauty that makes Colombia iconic.  With exports such as Sofia Vergara, Shakira and of course coffee the world is starting to take notice of Colombia’s geological and cultural beauty.  Backpackers are now swarming to get to know this still hidden gem before it becomes the main event as soon enough it will be out of the shadow’s and on everyone’s South American travel itinerary.

In English known as the Lost City, Cuidad Perdida is perhaps the most beautiful ruins that Colombia has to offer, rivaled only by the more famous Incan site of Machu Picchu in Peru.  The Lost City is believed to have been founded some 650 years earlier but only re-discovered in 1972 by some treasure looters.  It may be where the rumors of the Lost City of El Dorado and its mountains of gold began during the days of the Spanish conquest.

The trek to visit this archaeological site is not as easy as the journey to Machu Picchu; given the humidity and terrain, the trek is not for the light hiker.  Be prepared to get wet either from the inevitable rain or sweat, but everything makes it worth it when you see the ruins.  Even the 900 steps that you climb on the last day are easily forgotten when you get to see the vista of the sprawling lost city. Because it is not as well known and harder to reach you have a good chance of getting that uninterrupted photograph of the beautiful Ciudad Perdida and surrounding Sierra Nevada mountains.

The best way to cool off after hiking in La Ciudad Perdida is to take a 4×4 up to the small rural town of Minca. Located only a 100 kilometers from Santa Marta (1-2 hours by public transport), it is the coolest you will feel in this humid, tropical area of Colombia.

Casa Elemento is gaining momentum as the go to hostel in Minca for backpackers. Offering yoga classes, a pool to swim in, huge hammocks to lie in, Casa Elemento has it all for those wanting to relax after a hard four days of trekking.  Some make it here and never leave which is why more and more budget friendly accommodation’s pop up all the time.  You will never regret making the decision to see Minca even if just to lie by the pool or in the giant swinging hammocks.  The hammocks have become the most iconic part of going to this part of Colombia.  It is also one of the most spectacular sunsets that you will ever see, as you watch the sun dip behind the mountains to set over the sea in Santa Marta.

San Gil is the centre for adventure sports.  Go here to white water raft, paraglide, hike, rock climb or whatever else takes your fancy as they have it all.  The best place to stay is La Pacha located conveniently between San Gil and Barichara.  It is a cosy little place that hosts all sorts of nature loving vegetarian friendly travellers.  The accommodations are private and dorm geo-domes, or more commonly known as yurts.  This is the best place to stay in order to completely enjoy both towns.  Everything on the menu is vegetarian (but likewise if you are a meat eater there is a kitchen to use at your disposal) and the space includes a garden where you can find tomatoes and watermelons growing.

Because of its location it is easy to hop on a bus and see the quaint little town of Barichara which almost looks reminiscent of an Italian countryside with its cobbled streets and old world charm.  Drink some of the famous liquors in the small shops or take the 2-3 hour walk down from Barichara to the even smaller town of Guane and get the bus back.

This is definitely not something to miss when you go to Colombia.  Cooler than the northern part, but warmer than Bogotá, San Gil offers one of the most pleasant climates in Colombia and the atmosphere that La Pacha has created is second to none.

The second largest city in Colombia, has had the biggest hurdles to overcome in the stigma of the drug related violence that plagued the country.  Centre stage of the Netflix drama ‘Narcos’ you can visually understand why Medellín was given this title of most dangerous city in the world.

Now, however, Medellín is one of the most attractive places to visit in Colombia.  Walking through the city centre you may bump into a few locals, that despite their lack of English attempt to say ‘Welcome’.  It is most assuredly the friendliest city in Colombia, that even offers cheaper prices for the best manners.

Spread over a valley, one of the highlights is riding the cable cars to the top of the hill and getting the most epic view you will ever have of the city.  It is also perhaps one of the cheapest activities you will do as part of the metro system.

It’s climate is a perfect spring type weather where you can comfortably walk around the city without needing a sweater.  Medellín also offers free walking tours with the Real Tour being one of the best out of any city.  All of the tour guides love to showcase the pride that the city’s people or ‘paisas’ have for Medellín.

If you are more interested in the historical violence that overcame Medellín in the 1990s, there are tours which centre on the violence and you can even visit Pablo Escobar’s mansion, where he was shot and also the cemetery he is buried in.  If you visit any of these, it is also recommended to visit the Casa de la Memoría, which showcases the strength that brought Medellín out of this terrible time and the diversity that the city is now willing to embrace.

No guide on visiting Colombia would ever be complete without a mention of the capital city.  Bogotá does not have quite as much of the history as the northern parts of the country or even the adventure that San Gil offers.  Tormented like Medellín with the bad reputation from the 1980s, it is again a proud city that despite the constant cold temperature definitely deserves a visit.  It is certainly the city of museums.

The Museo del Oro (a token $1 entry fee is all that is required) is the one of the more notable of the museums to visit in Bogotá, but an often overlooked museum tour is a tour of Museo Histórico de la Policía Nacional.  It boasts displays of Pablo Escobar’s most famous items and gives a detailed account of the ultimate mission to capture him.  The police officers are very welcoming and happy to see tourists there plus it’s also a good opportunity for them to practice some of their English; as it is free it is most definitely worth the trip.  Tours run on the hour, so get there a little bit before to ensure you get an English speaking officer.

Other museums that are must sees are the Art Museum and National Museum, both within walking distance of the other.  They offer insight into the city through the artists perspective.  The National Museum is housed inside the city’s old prison and showcases a lot of the more historical aspects of the city before and after the Spanish conquest, including the geological makeup of the country.

For the more adventure seeking traveller there are bicycle tours of the city.  Bogotá is trying to make itself more of a cycle destination and reduce the traffic on the roads, so every Sunday some of the streets are shut down to facilitate more cycling in the city, known as Ciclovía or cycleway.  Highly recommended for a more personal tour is Cerro Bike tours as they limit the numbers of cyclers to make even the most nervous cycler comfortable. Included is a visit to see some of the best street art in the country, the biggest local market and a go at the Colombian national sport, Tejo, which involves throwing a metal ball at a ring lined with gunpowder; entrance fee is simply the purchase of beer!

This Wanderlust Wednesday Feature is by guest writer Michelle Lockwood

Originally from the Cayman Islands, Michelle has grown with a passion for the local environment.  From preserving the history and culture to the local sustainable management of the environment that we live in.  After taking a course in University of the environment and legal management of it, Michelle has become a more active member in the community helping with the Save Cayman initiative.  She also has a Master’s Degree in Environmental Science and Law from the University of Sydney, Australia.  More recently Michelle has been dedicating her time to yoga and the power that she receives from breath control and the presence required for a yoga practice.  You can usually find her in the sea on weekends.