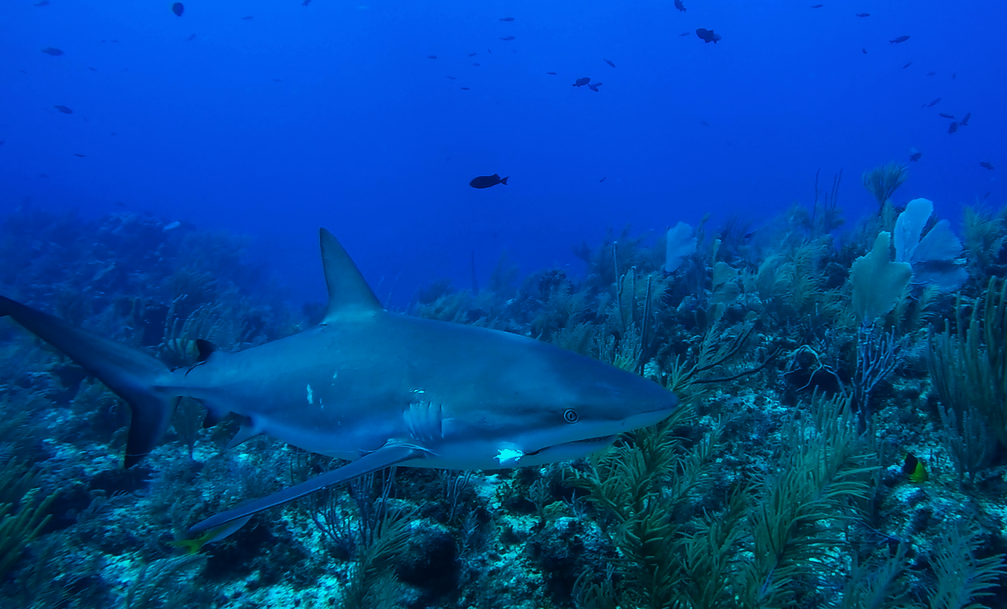 In 2009, the Cayman Islands Department of Environment (DOE), in partnership with Marine Conservation International (MCI), began studying Cayman’s sharks.  This initiative was originally sponsored by a UK Darwin Plus grant and by CayBrew’s, Whitetip Fund.  The Darwin Plus project has recently concluded and subsequently, since the beginning of the year, the project is now fully supported locally by CayBrew’s Whitetip Fund and continues to focus on improving shark research and conservation efforts in Cayman.

In recent developments and in part due to the hard work and efforts of both DOE and MCI, sharks and rays were included as totally protected species in the December 2013, National Conservation Law the provisions of that law effectively make the waters of the Cayman Islands a shark and ray sanctuary, since April 2015.  Shark research continues in order to monitor Cayman’s shark populations.  The research helps to better understand our sharks and the threats they face which results in better informed management decisions and ultimately more effective protection and conservation.  Providing a safe haven is key to effective conservation for these long lived, slow reproducing, vulnerable species.  As part of the ongoing research effort the Cayman Islands Department of Environment (DOE) aims to collect data to gain a better understanding of our shark populations.  By gathering data on our shark population the DOE is able to monitor their behavior such as movement patterns, home ranges, seasonality, as well as shark population numbers and recruitment in Cayman.  This step towards shark conservation with a commitment to protecting and studying these vulnerable species may result in encouraging other countries to establish their own sharks and rays sanctuary.  Currently, more than 5% of the world’s oceans is now protected.  There has been a positive momentum of countries making a commitment to marine protected areas and hopefully more underway.  But there is still a vast amount that still stands to be protected.

Over the years, a great stride has been made across the globe increasing the protection of sharks.  Legislation and designated marine protected areas that govern the protection of sharks and rays have been established across the globe in response to our oceans losing sharks at an exponential rate in comparison to their ability to replenish their populations.  Sharks take a significant amount of time to reproduce and mature.  Some species, produce only a few pups at a time.  In the unfortunate instance, whereby, a juvenile shark is killed before it has had a chance to reproduce it lessens their ability to replenish shark populations.  Shark sanctuaries provide a safe haven.   An increase in the coverage of marine protected areas may result in better chances for sharks having an opportunity to repopulate without being in danger of harm.   The continual removal of sharks on a global scale impacts the health of our oceans.  As sharks become more scarce therein lies the breakdown.  Sharks are apex predators, at the top of the food chain and therefore play an integral role in maintaining balance in our marine ecosystems.  This ensures thriving fisheries and healthy reefs.  Therefore, a healthy population of sharks is fundamental to a healthy ecosystem.  Sharks are worth more alive than dead.  The protection and preservation of sharks is beneficial to our environment and socio-economics now and in the future.

The Cayman Islands is surrounded by vibrant coral reefs and the stunning Caribbean Sea. Yet, there is not a great abundance of sharks seen in our waters as one would expect.  Evidently, decades ago there was a significantly larger population of sharks.  With shark protection measures in place now, the goal of DOE’s shark project is to better understand local shark populations for improved management and conservation.  The focus of the research work is on determining the relative abundance of sharks inhabiting the waters between our three islands, their hotspots and home ranges, their interaction within their habitat and how they utilize it, species of sharks that migrate through our waters, where they go and how long they stay, as well as those that may reside here.  The research project has four methods to comprehensively collect data to study their behaviors and patterns.  The methods used are: tagging with an acoustic transmitter, BRUV (baited remote underwater video) surveys, photo identification of individual sharks and shark sighting logging.  Each method has its advantages and disadvantages.  However, as a collective whole each method compliments one another, and fills in the gaps.

Acoustic receiver. Johanna Kohler. Redeployment and activity check. During data download of the acoustic receiver array on all three Islands. Dept of Environment.

Nurse shark (Ginglymostoma cirratum) on BRUV (baited underwater video survey or camera trap) footage. Nurse sharks are capable to bend and twist themselves to reach their prey (conch, lobster) which may hid in crevices. They have sandpaper like teeth and strong jaws to crush their prey’s outer shell and suck out the flesh. Nurse sharks play with the bait bag and twists in any direction, even lies on its back, to try suck the bait pieces out of the mash bag.

An efficient method to study and monitor sharks within our waters is tagging sharks with an acoustic transmitter.  The electronic transmitter sends unique pings which are received by acoustic receiver listening stations, and record when a tagged shark passes a receiver.   Many receivers are stationed in an array around each of our islands to give a broad range of in water coverage to track their movement.  Additionally, by quantifying the ratio of tagged versus untagged sharks researchers can estimate shark population numbers.  Therefore, reports of tagged sharks from the public shark sighting reports are important data and heavily relied on when estimating shark numbers with this method.  Attempting to determine stats and estimates of shark populations is super complex as there is a multitude of variables and factors that come into play.  Another method used are BRUV (baited remote underwater video) surveys which are done twice a year.  Essentially, it is a camera trap underwater.  Go Pros are stationed at 13 locations in Grand Cayman and 8 in Little Cayman.  This particular method serves to show a comparison of the abundance and species of sharks in various locations. An added bonus, it helps with monitoring sharks already tagged and logging the sightings of untagged sharks as well as their species specific behavior and the footage can be used for photo identification of individual sharks.  The photo identification (photo ID) compares images of individual sharks collected by BRUVs and divers to identify individuals.  This will help in estimating populations estimates, home ranges of individuals and their movement patterns across islands.  Lastly, shark logging, whereby divers report their entire dive logs including dives with or without shark sightings is an important component of the research effort.  Volunteers are fundamental to this aspect of the project.  A network of local divers and dive companies are participating in the sharklogger program which was launched 1.5 years ago.  The dive information such as date, time, depth, dive location, and information on shark sightings such as species of shark, tagged or untagged is collected by the individual divers in the program.  The network extends over all three islands and it encourages the collaboration and participation amongst private divers and local dive companies.  The various methods used for this project work from different angles complimentary to one another in collecting the pertinent data.

Dive In To Help Sharks

Report a shark sighting in Cayman.  Have you seen a shark lately? Help DOE to build a database on the whereabouts of our sharks. Email your shark sighting to the DOE (sharkloggers@gmail.com) or post on the Shark and Cetaceans: the Cayman Islands Facebook page (http://bit.do/SpotThatCayFish) to get added to the DOE database.  Let the research team know if the shark had a dorsal fin tag.

Become a Sharklogger. Recreational divers, and local dive companies are encouraged to join the Sharklogger program. The dive information helps the research team to monitor the movement patterns and behavior of sharks in Cayman. For more information email: sharkloggers@gmail.com

Caribbean reef shark (Carcharhinus perezi) on Grand Cayman. Male. Hook in Jaw. Stainless steal hooks will rust out and the wound will heal relatively quickly. In case of an accidental catch ,it’s good practice for fishermen to cut the line as close to the hook as comfortable for the fishermen or even cut the hook to minimize the trauma on the shark.

The DOE/MCI shark research relies on independent funding and support. The research team is planning on tagging more sharks with acoustic transmitters within the next 3 years. Corporations and other organizations can play a role in helping the DOE to better understand sharks.  Adopt a shark! Corporations can make a donation to purchase an acoustic transmitter or receiver and in return for their commitment to help sharks, they can name the shark that is tagged.  For further details and information on donation packages please contact: sharkyresearch@gmail.com