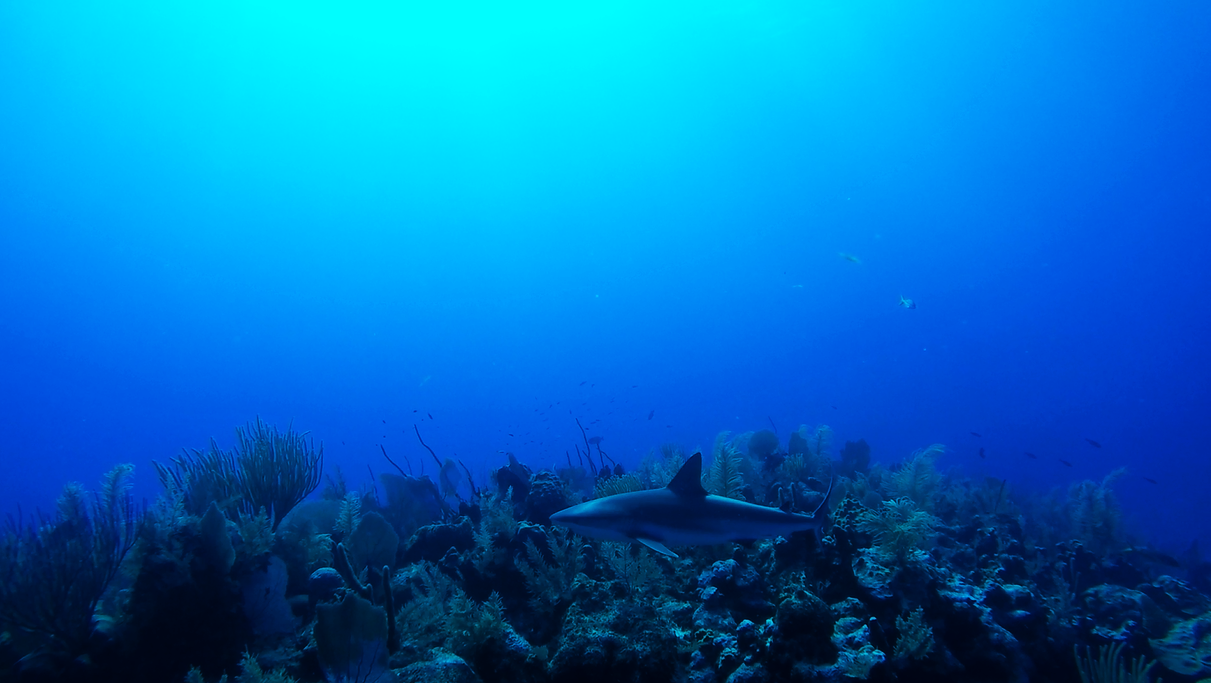 Today’s feature is a guest post by Johanna Kohler.

Fig 1: Map with tracks of a tagged female Caribbean reef shark(Carcharhinus perezi) moving between all three of the Cayman Islands over 2013, 2014 and 2015.

The Bash Brothers are two male sharks in East End of Grand Cayman. They like to swim together, one behind the other on the edge of the wall. Recently a smaller male shark has joined the team – hence “Little Basher”. One of the Bash Brothers has a distinctive scar on its gills. Some days they may be inquisitive on other days they may ignore you. When you go diving within their home range they may show up.

Scarlet, also known as Smudge, is an old local at East End of Grand Cayman. She is easily spotted by her dark birth mark on the corner of her mouth. She isn’t the largest shark East but she will stay with you during a dive and makes a great object for photos because of her calm nature.

Fin the friendly Nurse shark is a well-known individual among local divers and has many, many, many names. SHE (not he) has a distinctive scar on its mouth probably from a hook encounter years ago. She lives on the West Side of Grand Cayman and comes very close to divers and sometimes stays with a group of divers during their entire dive.

This female shark is a legend in Little Cayman. She is well known to local divers and a welcomed visitor.  She was tagged by the DOE/MCI research team in 2010. Back then when she was 1.5 m long. Her nick name originates from her dorsal fin tag number “DOE #107”. Over the past 7 years she stayed around, survived a hook in her stomach, and grew up to an estimated 2.2 m. By now she is the dominant female North of Little Cayman. She may show up during a dive, patrolling her home range.

Sharks are all serious and always on a mission? Not so Nurse sharks. These sharks can bend and twist their bodies, even are able to lie on their back, to get to their prey (e.g. Lobsters, conch) which may hide in crevices. Also these sharks would rather suck their prey out of their shell. Their teeth are like sandpaper and their strong jaws are able to crack the outer shell of their prey. The BRUV footage (underwater camera traps) documents this behavior. Often Nurse sharks lie on their back under the bait bag to try suck the bait out of the fined meshed bag.

Some of our sharks don’t have to swim in order to breathe. As you may know sharks are fish and use gills to breathe rather than lungs. Most sharks have between five to seven gills slits on each side of their head. The gills oxygenate the blood. Most sharks need to swim in order to breathe. This way of breathing is called “ram ventilation”. That’s why most sharks swim with a slightly opened mouth to allow the water to flow in and over their gills as they move through the water. Caribbean reef sharks, Nurse sharks and Lemon sharks however are able to breath when stationary. When these species swim they also respire via ram ventilation. But while resting, these sharks pump water actively over their gills to ensure oxygenation.

Some of our sharks have an orange dorsal fin tag. Over time the tag may be overgrown by algae in which case it may be green or have fallen out leaving a scar behind. The Dept. of Environment (DOE) and Marine Conservation International have been tagging sharks in Cayman since 2009. This research project is largely funded by CayBrew’s Whitetip Conservation Fund. You are able to spot tagged sharks via the dorsal fin tag (or it’s residual on the shark’s dorsal fin). If you see a tagged shark report it to the DOE (sharkloggers@gmail.com) to add your sightings to the DOE database and help local shark research.

Identifying fish in general requires some knowledge and skills. When it comes to identifying sharks species some shark species look quite distinctive. Some shark species however have quite similar features which may cause some confusion and make identification tricky. The following clues may help to determine what kind of shark you’ve encountered during your dive or snorkel.

The colouration and profile of Nurse and Lemon sharks look pretty similar. Both dorsal fins (sharks have two dorsal fins) are similar in size and the position of the first dorsal fin (far back) is similar in both species. To distinguish a Nurse shark from a Lemon shark focus on the following:

Sharks grow relatively slow and reach maturity late. The maximum size in some species may differ for male and females which is also true for size at maturity. Below the numbers of the most common shark species in Cayman are summarized. These life characteristics make shark populations particularly vulnerable to exploitation. The slow growth and late maturity may result in capture of a shark individual before it had the chance to reproduce. This of course impacts local shark populations negatively.

8. Protected yet still threatened in Cayman

Sharks are vulnerable to fishing and sensitive to environmental decline. Unlike most fish stocks, sharks grow slowly, mature late, have relatively few pups and long gestation periods, which makes them particularly vulnerable to overfishing. This is the reason why sharks are protected in Cayman. Although shark protection measures were put in place in 2015 the main local threat to sharks is still fishing. Sharks are still caught accidentally or as by-catch. Accidental kill together with damage to key habitats such as coral reefs, affects the food chain on which sharks are dependent and puts pressure on local shark populations. A previously exploited population of sharks can take more than 50 years to recover once they are protected. With the National Conservation Law the Cayman Islands are in a position to conserve the local shark biodiversity, and allow these feared and misunderstood animals to be a part of nature tourism.

Shark deaths reported to the DOE since Jan 2017:

Sharks are worth more alive than dead in Cayman. Tourist love healthy reefs and come to Cayman predominantly because of its stunning waters and see and engage with our marine life. Divers love to see healthy reefs with thriving fish communities as well as sharks. According to a report by the DOE the value of having sharks on the reef is about US$54 million per year. By contrast, catching and killing sharks was worth only US$1.6 million per year.

Sharks can sense us long before we know a shark is near. Sharks have various senses to experience their environment. Two senses the lateral line sensory system and the electronic sensory system (Ampullae of Lorenzini) help sharks to detect other animals, including humans, in their surroundings. The lateral line runs along the length of the body on either flank. It detects movements and vibrations through even minute pressure waves (e.g. generated by prey). The electronic sensory system is unique to sharks. The Ampullae of Lorenzini are a network of fine electro receptors and allow sharks to detect electrical signals, temperature gradients and electrical fields present in all animals through the pores in their skin. This way sharks are able to pick up the heartbeat and movements of other animals and divers from a far. So a shark knows that there are divers around even before it comes close to show itself. Since sharks are generally rather shy they will quickly swim away or try avoid a group of divers. However, each individual is different. Some shark are inquisitive others rather shy. If a shark is inquisitive it may come close and show itself to divers in order to investigate these bubble blowing underwater “aliens”.

Johanna Kohler is a marine biologist with research interests in shark behavior and ecology, shark reproduction and human-shark conflict mitigation. She joined the Cayman Island Dept. of Environment (DOE) as Shark Project research officer in 2016 and is also a PhD candidate at the Heriot-Watt University, Scotland. Johanna graduated from the University of Cape Town, South Africa majoring in Marine Biology and Oceanography in 2015. Before and next to her studies she gained considerable experience in research and fieldwork. She has worked with sharks alongside leading South African Shark Researchers at the Two Oceans Aquarium, White Shark Africa, the South African Shark Conservancy and Shark Spotters. As part of the DOE Shark Project research team, Johanna continues to follow her passion to study sharks in order to protect these misunderstood animals. In 2016 she was involved in the launch of the Sharklogger Programme a citizen science programme that involves a network of divers that logs shark sightings in Cayman. She also spearheaded the SharKY Fest in June 2016. Follow her work on Instagram: johannakohler. For more information on the Sharklogger programme email sharkloggers@gmail.com and follow the “Sharks & Cetaceans: the Cayman Islands” Facebook page.