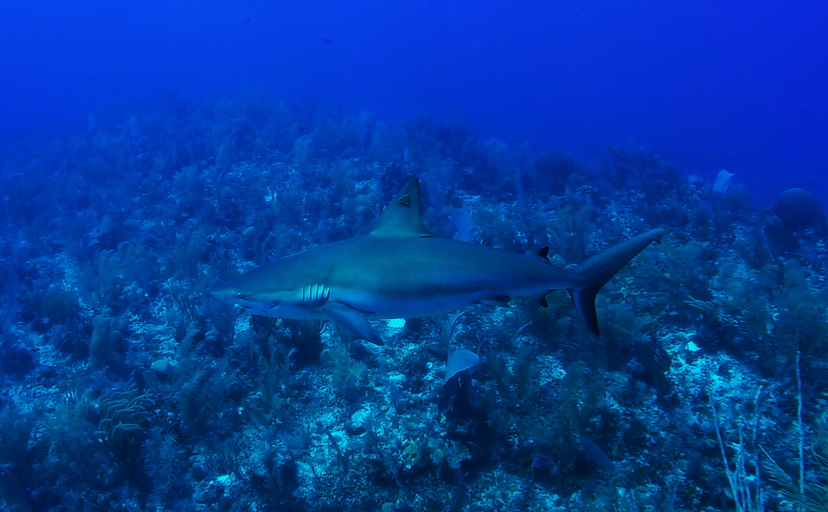 Ever wondered what it would be like to be a shark researcher for a day? Today’s feature is a Q&A with Johanna Kohler, Shark Project Research Officer at the Cayman Islands Department of Environment.  Johanna Kohler is an accomplished Marine Biologist, specializing in shark behavior and ecology, currently based in the Cayman Islands. She has gained valuable experience from both, working and traveling, all over the world, giving her an impressive portfolio in the field. As an advocate for ocean conservation, Johanna Kohler is passionate about protecting and preserving sharks. Her respect and love for sharks is evident through her commitment to study sharks in order to gain valuable insight for the betterment of shark conservation. Sharks are majestic creatures that have unfortunately been misunderstood. As a result sharks are mostly portrayed in a negative light, resulting in them being wrongly feared. In actuality what we should be afraid of is an ocean without sharks, not an ocean with sharks. Sharks play a vital role in regulating the health of the ocean and keeping marine ecosystems in check. A healthy shark population is vital to ensure healthy coral reefs and thriving fisheries. One of the greatest threats sharks face is mankind. Shark populations have drastically declined over the last decades due to sharks being slaughtered for their fins, meat, liver, skin and teeth around the world. According to the IUCN red list, many species of sharks are now threatened or even endangered. Great strides have been made globally to increase the protection of sharks by way of establishing shark and ray sanctuaries as well as marine protected areas. Education along with conservation is key to ensure the protection and preservation of sharks worldwide and locally. A disconnect develops when one fears what they do not understand. Therefore, shark research is important, as it is a means to understanding more about sharks and debunking myths about them. Through education, one can begin to change the general public perception of sharks to make humans realize that sharks are not man eating monsters, but rather shy animals that are beneficial to our oceans. Johanna Kohler supports educational outreach in schools and to other occasions such as shark talks in bars and diving centers. She believes in the saying: You protect what you love and can only love what you know. For Cayman’s people to get to know sharks, she spearheaded the SharKY Fest last year. The Fest was a celebration of the first anniversary of the shark protection measures which came into force April 2015 in the Cayman Islands. The SharKY Fest involved local businesses, families, schools, the National Trust, Ellen Cuylaerts, divers and diving centre, fishermen, and the shark project’s main sponsor CayBrew.

Read below what it is like to study and work with Cayman’s sharks and what drives her to continuously work towards a better understanding and protection of these fascinating animals.

1. What inspired you to become a shark researcher?

Ever since, I have been fascinated by the ocean and its inhabitants. In High School I’ve enjoyed all science classes. Between my high school degree and university, I’ve gained more knowledge and hands-on experience in various fields of marine biology. Working with and in the marine environment to conserve and protect it, is my passion. Due to my travels, volunteering, diving and work experiences, I’ve become conscious of the impact of anthropogenic activities, including eco-tourism, on the marine environment. Especially, the work as dive instructor on Cyprus, has influenced my perception. During my dives, I had the opportunity to compare the remains of a former magnificent ecosystem under a dynamite fishing regime, on the Greek side of the island, to the fauna and flora of protected artificial reefs, and the Turkish side of the island, where no dynamite fishing had taken place. Sharks in particular fascinate me. I love the way they move. Next to my studies I’ve enjoyed working alongside leading scientists in the field which only increased my interest and passion for these amazing animals. Realizing that we still know so little about them which leads to many myths causing people to hate and kill sharks, inspired me to become a Marine Biologist to study these misunderstood animals. I intend to use my knowledge to develop better ways of protecting the marine environment and its wildlife, as well as teaching others about it in turn.

As part of the Shark Project research team the main aspect of my job is to monitor the relative abundance and behavior of our sharks species in Cayman. The monitoring involves various methods including BRUV (Baited Remote Underwater Video /i.e. camera traps) surveys, acoustic telemetry, photo identification and the Sharkloggers, a citizen science initiative. My job is it to plan and execute each survey to ensure data collection. One other aspect of my job is to investigate further the movement and ecology of our sharks populations, also with regards to Marine Protected Areas, to improve and inform conservation management. I’m also leading the Sharklogger programme which involves working closely with diving centers and recreational divers in order to track the movements and behavior of our sharks. When divers report sharks to the DOE (dead or alive), my job is it to archive the sightings in the DOE database. Since I’ve started out as dive instructor, I love this part of my job. Lastly, I give talks in schools and to other occasions to promote public awareness of sharks and the shark conservation legislation amongst local communities as well as to share new research findings.

This varies a lot day – to -day and with season. During a field season I’m on the boat every day, mostly all day, to collect data. Depending on the work that has to be done, I’m either deploying BRUVs (Baited Remote Underwater Video Systems) or dive to download the acoustic receivers or collect footage and behavioral data from our sharks. When we tag sharks with acoustic transmitter it may also involve boat work during some nights depending on the species that we want to tag. Sometimes I spend half the day on the boat and the other half to clean and preparing the gear for our next trip as well as with data analysis in front of the laptop. When the field season is over, I spend the time going through the data and work on analyzing the information which involves a lot of desk and laptop work and some occasional days on the water.

4. What is it like traveling for work to various diving locations?

I love to work in the field and I consider myself lucky to be able to work in the stunning Cayman waters and dive all these amazing sites. Despite the desk work during off season, I get to spend most of the year in/on the water with these fascinating animals. Travelling to different places is exciting and fun, but can become hard work when you have to plan the logistics of your gear. One trip to the sister islands involves packing 5 – 13 boxes of gear, transporting them to Cayman Airways Cargo, sending them off and collecting them on the other side, and unpacking everything before we can even begin the work. When it’s time to head back to Grand Cayman it’s everything all over again. Despite the challenging logistic in terms of our equipment, I love to travel to the sister islands. There is something special about them and the diving is amazing.

5. What advice would you give students interested in becoming a shark researcher?

Get hands – on experience in the field. I grew up in the middle of Germany, far away from any ocean. I had to make plan to gain the necessary practical skills. Before and during my studies I’ve volunteered and shadowed marine biologist in the field. This way I got boat and diving experience, worked in aquariums and helped other PhD students with their fieldwork. This way I got to work with sharks from the start and became more and more skilled in handling the animals as well as working on the water.

Register at a University. I’ve attended all science classes in high school which helped me when I started University. To major in Marine Biology and Oceanography you will have to attend chemistry, physics, mathematics, biology and statistics. Don’t skip these. These subjects are fundamental to build upon and the broader you start out the better your basis of knowledge.

Work really hard. I’ve worked and volunteered on weekends which involved really early mornings, longs days or late nights – all in my spare time. If I had a day free of lectures I would work on my desk work ahead of time so that I could spend the day in the field volunteering.

Be like a sponge. Marine biology comes naturally to me. This of course makes it easier to understand and remember things I read or someone explains to me. Ask lots of questions when you volunteer in the field. When I’ve worked with more experienced people I would ask thousands of questions – and I still do – to learn from them. You never stop learning, there is always room to improve.

Read and write as much as you can. When it is your passion you will want to find out more about a certain topic. Ask questions. Practice your scientific writing skills but also make sure you are able to explain the science to members of the public that may not know that much about science. As scientist and shark researcher it is important to be able to communicate the research finding with the public.

Don’t give up. Make sure it is your passion. There may be times when it is hard and you question why you do what you do. I know I did and sometimes still do. However, if sharks are your passion this will keep you going through the harder times where you may doubt yourself. In the end all the hard work will be worth it.

6. What is your favorite shark species?

Sharks will always surprise you, it doesn’t matter how much you know about them. Each individual is different. I love the Caribbean reef sharks in Cayman. Diving with them and getting to know each character by meeting the same individuals again is really special. My favorite shark is the Tiger shark. I love their pattern and head. Baby tiger sharks look very cute with their big eyes, small snout and the gorgeous shiny pattern on their bodies. Despite many shark encounters over the years, I always take a shark encounter seriously. These animals are deeply misunderstood and often portrayed as scary, man eating monsters. As top predators in the ocean, sharks do deserve our healthy respect. Once you have dived with sharks you will see that they are fascinating, majestic animals that don’t need to be feared. In contrary, you may be surprised how shy sharks can be when all you see is their tail disappear in the blue.

7. What current research project are you working on?

Currently, we’ve just finished up our main field season which included the Spring/Summer BRUV survey, the acoustic receiver download on all three islands and shark tagging. In the next few months I will analyze the collected data and continue with a small scale study on juvenile sharks in the sounds. I’m also planning on some more events for the Sharkloggers and may hold a few talks.