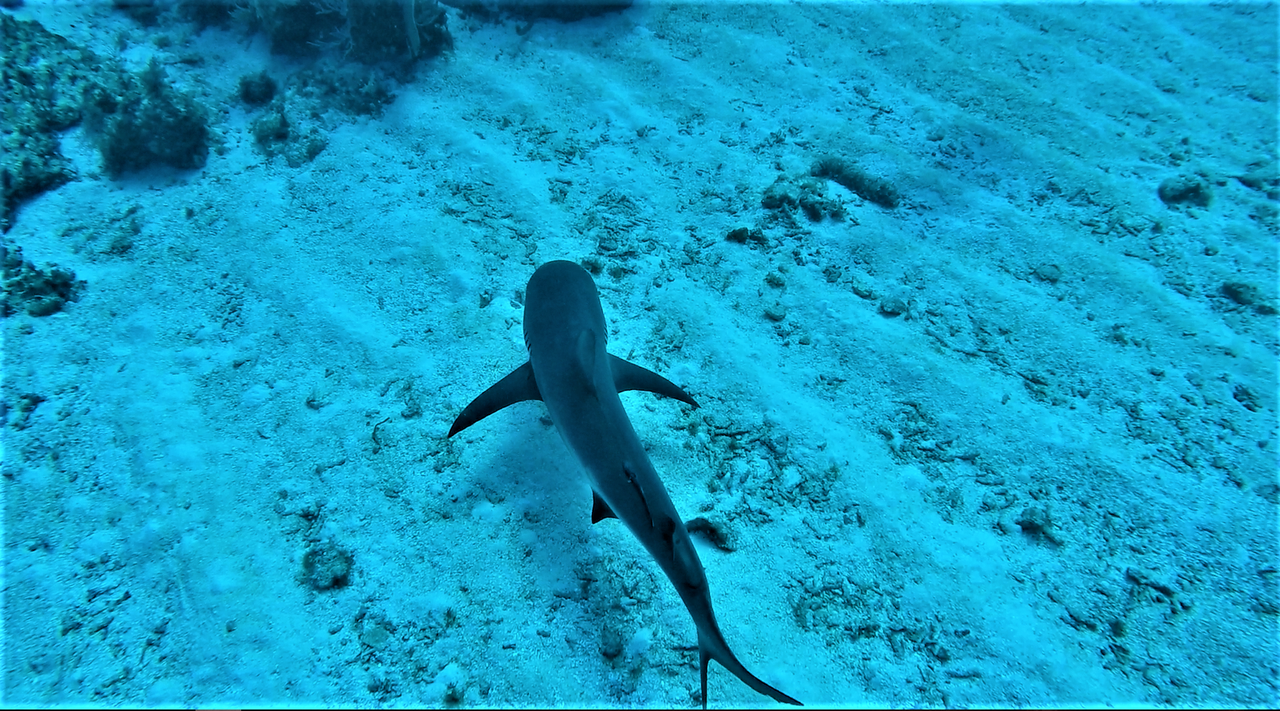 The Cayman Islands are known for being a popular diving destination in the Caribbean with over 365 dive sites. Some of the main attractions of dive sites in the Cayman Islands include wreck diving at famous shipwrecks such as, the Kittiwake, the Balboa, the Oro Verde as well as our biodiverse reefs. In order to help maintain our status as a diving destination hotspot, the Cayman Islands for over 30 years, has been protecting its marine life and reefs with Marine Parks. In 2015, the Cayman Islands increased their ocean conservation as the National Conservation Law effectively put protection measures in place for sharks and rays. Sharks are an apex predator, at the top of the marine food chain, as a result they regulate the species at lower down the chain levels, helping to keep marine ecosystems such as reefs balanced. Sharks therefore are a considerable asset to our islands reefs and other marine ecosystems. Additionally, sharks are beneficial to ecotourism as many visiting snorkelers and divers are keen to see large charismatic marine life, and sharks tend to be one of the main attractions. According to a report by Marine Conservation International and the Cayman Islands Department of Environment (DOE) the added value to marine tourism of having sharks on the reef is about US$54 million per year. For divers and snorkelers, seeing a shark is both a privilege and a highlight. There are 8 species of sharks commonly found in the Cayman Islands, including: Great Hammerhead, Nurse shark, Lemon shark, Caribbean Reef shark, Blacktip, Tiger shark, Oceanic Whitetip and Silky shark. Amongst the variety of shark species found in the Cayman Islands, some species of sharks reside in Cayman waters all year long and inhabit coastal waters. Whereas, other species of sharks are pelagic and seasonally pass through Cayman while on migratory routes.

Nurse sharks tend to be known for their docile behavior. Some might even refer to them as the “puppies” of the ocean as some may demonstrate a friendly demeanor. Nurse sharks are creatures of habit. Once they find a favorite resting spot(s) they tend to frequently inhabit that area. In some instances, nurse sharks can be found “hiding” under coral or tucked away in shipwrecks as they rest during the day and are more active at night. An interesting fact about nurse sharks is that they are one species of sharks that is able to rest on the sea floor and actively pump water over their gills. Nurse sharks are typically found in tropical and subtropical waters at depths up to 240ft. Unfortunately, Nurse sharks often fall victim to a case of mistaken identity, as they are often mistaken for Lemon sharks. This is a result of Nurse sharks and Lemon sharks being similar in body shape and coloration. Nurse sharks vary from a dark grey to yellow brown in coloration and can grow up to 14ft in length.

• Life Span: unknown but thought to be around 25 years

Below is a helpful chart showcasing similarities and differences between Nurse sharks and Lemon sharks.

Lemon sharks, as their name suggests, are recognizable due to their yellow brown color. They grow up to 11ft in length. Lemon sharks are found in the tropical Western and Northeast Atlantic and East Pacific. Lemon sharks are quite adaptable to varying water conditions. They are among a few shark species that are tolerant of relatively high water temperatures. Due to living in shallow coastal waters, Lemon sharks can also adapt to water conditions with low salinity and low oxygen concentration levels. Lemon sharks have been known to be fairly gentle and non-aggressive, but – as with any wild animal one must always be careful and alert.

As the name suggests, Blacktip sharks get their name due to the black tips or edges found on their pectoral, pelvic and dorsal fins. Blacktip sharks are considered to be very timid and as a result they tend to be skittish and try to avoid divers. This makes it rather difficult to encounter Blacktip sharks as they are very shy and swim fast. Blacktip sharks can be found in tropical and subtropical coastal waters in depths up to 100ft.

Pelagic sharks, also known as oceanic sharks, love open waters. They inhabit open waters of the oceans and seas. Various species of pelagic sharks are known to visit Cayman waters on their migratory route. During their voyage through our region they can typically be found in deep waters just offshore, yet may come for a visit to our reefs.

Tiger sharks get their name from their visually striking striped pattern that resembles that of a tiger. Their name might give the impression that they are fast swimmers, however, they are actually relatively slow. Tiger sharks can be found in tropical and subtropical oceans in both coastal and open waters. Tiger sharks prey mainly on rays and turtles. The deepest known sighting of a Tiger shark in the Cayman Islands was seen at the Cayman trench at just shy of 900ft.

Oceanic Whitetip sharks have distinctive white marks on the tips of their fins. They are epipelagic and as such live predominantly in the upper 660ft of the ocean water column and can often be found near the surface of water. They are active both day and night and move at a slow pace. In the past 50 years, world fisheries have drastically reduced their populations. Specifically, in the Gulf of Mexico, their populations have dramatically declined by 99.3%.

• Life Span: unknown but thought to be around 25 years

What to do with a hooked shark?

Despite protection measures, sharks are still threatened by local fishing in Cayman. Fishing and fishing charters are popular among Caymanians, residents and visitors. Although fishermen don’t target sharks, no fishing methods is 100% selective. This is why sharks may bite the bait or get caught by going for the snapper or grouper struggling on the line. The accidental catch or by catch of sharks is still a significant threat to our local populations. If these sharks die, it will have a massive negative impact on our shark populations. Compared to other fish, sharks grow rather slowly, mature late (some sharks mature when they are 8 – 20 years of age), have long gestation periods ((they are pregnant for up to 1.5 – 2 years) and produce relative few young. These life characteristics limit the reproduction rate of a shark population and its ability to replenish itself quickly. Additionally if immature sharks are killed before they are able to reproduce they miss their chance to contribute their genes to the next generation.

The DOE recommends the following for the release of sharks in case of accidental shark catch:

• Report the incident to DOE

Sharks have incredible self-healing powers and a strong immune system. Once the hook is out (either cut or rusted away) the hook wound will heal quickly.

* The International Union for Conservation of Nature (IUCN) “Red List” summarizes the conservational status for each species (http://www.iucnredlist.org/).