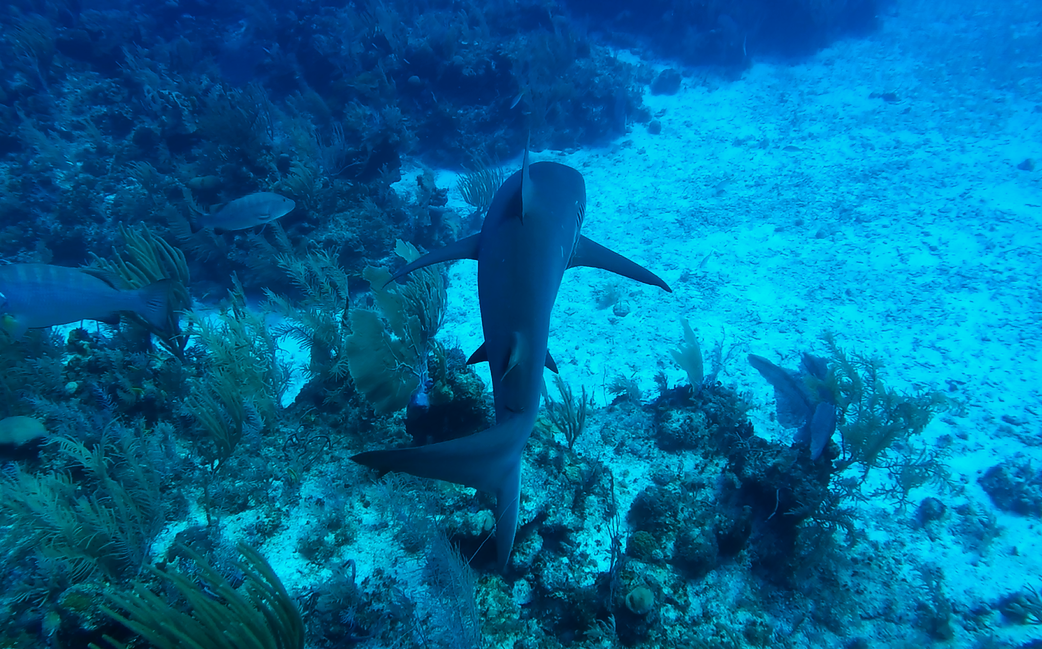 As custodians of our stunning coral reefs and charismatic marine life, for over 30 years the Cayman Islands Department of Environment (DOE) has been protecting our island’s precious marine environment by establishing marine parks. Since 2015, the DOE increased marine protection by designating Cayman’s waters as a sharks and rays sanctuary, under the National Conservation Law. In part of DOE’s shark conservation efforts, shark research is an ongoing project to gather data about Cayman’s shark populations and monitor their behavior and patterns. Additionally, CayBrew’s Whitetip Fund supports DOE’s shark project with a focus on tagging sharks to improve shark research and conservation efforts in the Cayman Islands. The shark project utilizes four methods as a means to comprehensively gather pertinent data about Cayman’s sharks. The methods used are: tagging with an acoustic transmitter, BRUV (baited remote underwater video) surveys, photo identification of individual sharks and shark sighting logging. To read more about this ongoing project click here

Sharks are of significant value to our coral reefs and other marine environments. According to a report by Marine Conservation International and the Cayman Islands Department of Environment (DOE) the added value to marine tourism of having sharks on the reef is about US$54 million per year. Sharks are worth more alive than dead! To ensure the balance of the marine ecosystems are in check, we need healthy populations of sharks. Sharks play an integral role in maintaining the health and balance of marine ecosystems. As advocates for sharks and ocean conservation, in an united effort we can help to protect sharks and other marine life through the conservation of our oceans.

Cayman’s shark research relies on external funding and donations. Please support the DOE shark research team to help protect our sharks in the Cayman Islands. By simply, donating your time or money (no matter how small the amount) to this project will help the Cayman Islands Department of Environment to achieve their goals working towards the betterment of shark conservation. 100% of the donation will go directly to shark conservation in Cayman.

If you would like to become a sharklogger, please email: sharkloggers@gmail.com

Sponsor an Acoustic Transmitter and Adopt a shark

The DOE/MCI shark research relies on independent funding and support. The research team is planning on tagging more sharks with acoustic transmitters within the next 3 years. Corporations and other organizations can play a role in helping the DOE to better understand sharks. Adopt a shark! Corporations can make a donation to purchase an acoustic transmitter or receiver and in return for their commitment to help sharks, they can name the shark that is tagged. For further details and information on donation packages please contact: sharkyresearch@gmail.com

Behind the Scenes: Working with Sharks

Watch this video to see what a typical day of shark research and tagging is like.