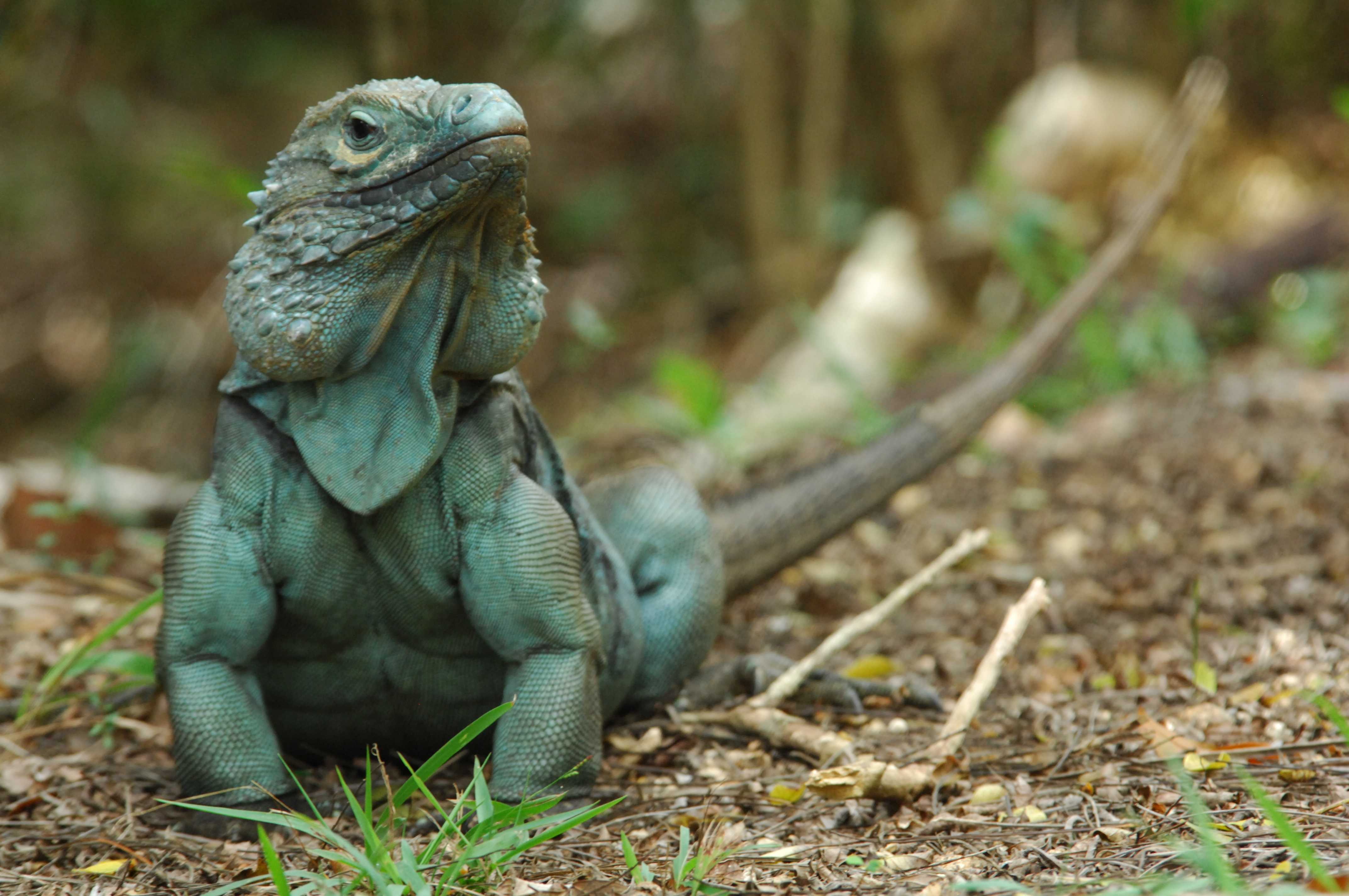 Blue Iguanas quickly adapt once released into the wild and thrive. However, their positive transition into the wild is tainted by looming dangers, which pose a threat to the Blue Iguanas, such as: feral cats and stray dogs. By the age of two, Iguanas are mature enough to venture into the wild, specifically protected areas such as the Salina Reserve, a 625-acre nature reserve. As previously stated, one of the main threats to the Blue Iguana is feral cats and dogs, as they are known to wander into the protected nature reserves and attack the iguanas. This is problematic, as it interrupts the chances of a steady population growth. The increase of the Blue Iguana population is dependent on the survival of the young iguanas, as well as to ensure a wild population which is genetically diverse. The Blue Iguana Recovery Program, aims to maintain at least twenty different family lines in the wild. One way to solve this ongoing issue is to encourage the public to practice pet responsibility. For instance, a pet owner can do their best to ensure that their dog is on a leash when be taken for a walk, and to keep any gates on their property closed to reduce the chances of their dog(s) wandering off their property and into the nature reserves. In regard to cats, choosing to keep them indoors will increase their longevity and reduce the risk of iguanas been attacked by cats. Another option, is to spay and neuter pets, this will help decrease the number of feral cats and dogs roaming the streets, without a home. Proper pet ownership, is beneficial to all parties involved, and promotes the safety and wellbeing of both domesticated pets, and the iguanas in the wild. Additionally, a massive undertaking of fencing-in the existing protected areas will allow for measures of safety to be implemented to ensure that feral animals cannot come in contact with the iguanas. Though this may be a rather extreme solution, it will require a lot of planning and funds. It may not be a project feasible at this time, but worth considering.

Another way to help keep iguanas safe is by reporting the siting of an iguana so that the staff of the Blue Iguana Recovery Program can safely relocate the iguana to the protected areas they inhabit.

From another point of view, iguanas and their habitat are threatened by over development. As the island continues to take on new development projects, subsequently natural habitats of endemic species of wildlife and plants are greatly reduced and destroyed. Therefore, as a means to ensure the safety and future of Cayman’s endemic species and wildlife, purchasing land near to, and surrounding the natural reservations is a viable solution. This allows for the expansion of natural reservations, giving the iguanas more space to roam freely and safely. Furthermore, it reduces the eradication of our natural eco-systems. Iguanas are known to be territorial, however, they do spread out.  Thus, the existing protected areas is not enough to sustain them. Again, such a project will require a considerable amount of funding but worthwhile.

A little secret about the Blue Iguanas is their vital role in sustaining our natural eco-system. Blue Iguanas simply put are excellent fertilizers. As vegetarians they enjoy eating leafy greens and lots of fruit. Once they deposit seeds of berries and fruits back into the soil, essentially they have greatly helped in replenishing our natural environment. At the Blue Iguana Recovery Program, the Iguanas have contributed to the numerous fruits trees which have sprung up, such as mango trees. Seemingly, many of these trees are fruitful. Though there is currently no scientific report stating that Blue Iguanas are responsible for replenishing endemic plant species; nor can one disprove that they contribute to sustaining endemic plant species. The fact remains, Blue Iguanas have their role to play in the circle of life, and maintaining the balance of nature.

The Blue Iguanas may no longer be in danger of becoming an extinct species, thanks to their exemplary handwork and commitment of the Blue Iguana Recovery Program staff and volunteers, but they still depend on all of us to ensure that their future is bright. Evidently, there has been a great shift from saving the Blue Iguanas to now maintaining their steady population. This does not mean we can rest on our laurels, collectively we can strive together to ensure that Blue Iguanas are never faced with the threat of extinction again. Our fight now, is to maintain a steady and thriving population of Blue Iguanas. There is still a wealth of knowledge to be learned about our beloved Blue Iguanas.

Show support and stay connected with updates on the Blue Iguana Recovery Program, join them on Facebook, click here.

Read and learn about the Blue Iguanas, pick up a copy of Fred Burton’s A Little Blue Book, available at the Botanic Park Gift Shop.

Be one with nature, visit the Blue Iguanas at the Botanic Park.