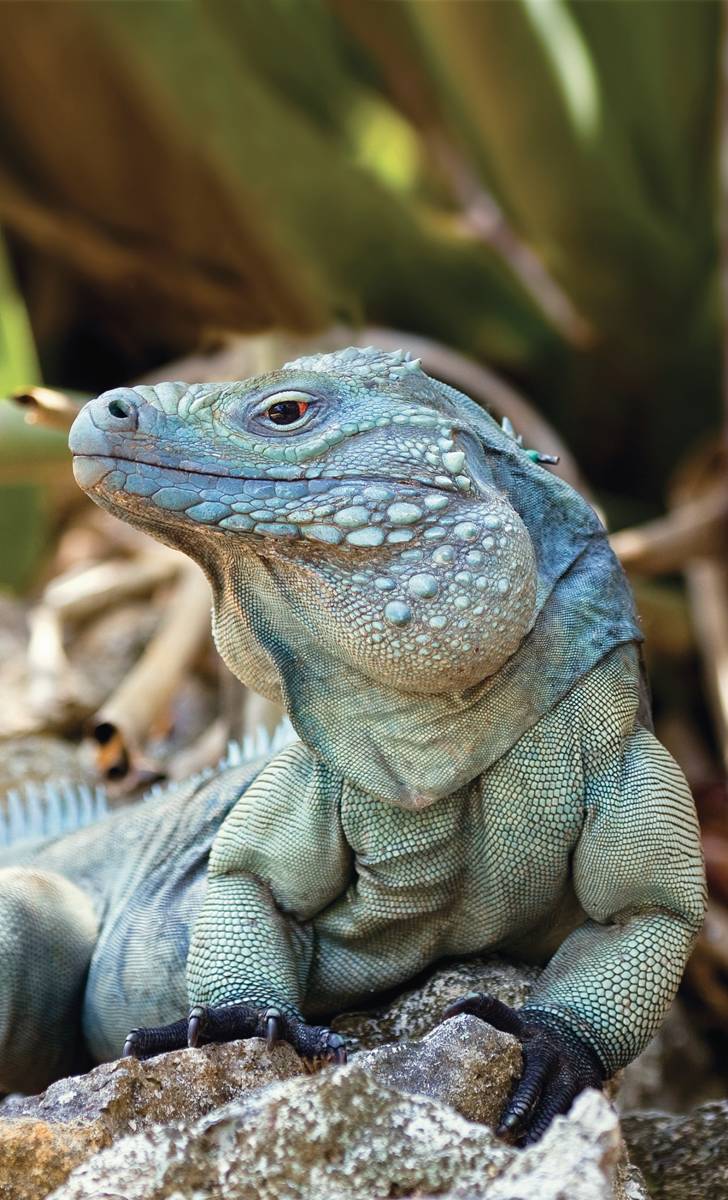 The Blue Iguana is endemic to Grand Cayman.  Currently, there is approximately 1,000 Blue Iguanas in the wild.  The Blue Iguana Recovery Program has been dedicated to the conservation of these beautiful creatures since 1990.  The staff and their team of volunteers do an incredible job protecting the Blue Iguanas and ensuring their conservation.  The recovery program has been successful in increasing the population of the Blue Iguanas so much that they are no longer considered critically endangered and at one time close to extinction. This being said, the “Blue’s” are still an endangered species.  The Queen Elizabeth II Botanic Park is home to one of their sanctuaries and the Blue Iguana Recovery Program.   The recovery program focuses on captive breeding, to later release them into the wild.  Captive breeding has proven to be the most effective way to restore their population and is fundamentally why Blue Iguanas continue to exist today.  Staff members also collect valuable data from research as they study the behaviors and health of the Blue Iguanas.  In addition, Blue Iguanas also call the Salina Reserve home.  It is a 625-acre nature reserve especially protected for the Blue Iguanas.  Typically, the Blue Iguanas are released into the wild and the Salina Reserve once they reach maturity at the age of two.  Finally, the Colliers Wilderness Reserve, another sanctuary for the Blues has a healthy population of Blue Iguanas.

The Blue Iguanas play an important role in our ecosystem, they are considered to be efficient seed dispersers.  They feed primarily on fruit from native trees and shrubs.  The seeds remain unharmed as they pass through their digestive system allowing them to be primed to germinate as they deposit the seed (in a pile of dung, also a great fertilizer).  The Blue Iguanas while roaming their natural habit trek across large territories which is beneficial as they disperse seeds across the landscape.  As a result, the Blue Iguanas help to maintain a fair amount of many of our islands indigenous trees and shrubs. Often, trees such as mangoes, a favorite of the Blues grow quickly and are fruitful through the help of the Blue Iguanas being efficient seed dispersers.

Threats Faced By The Blue Iguanas

Our island’s iconic Blue Iguana currently faces various threats.  A major threat they face is the ever increasing loss of their natural habitat due to overdevelopment.   Therefore, it is key that new development projects take into consideration environmental concerns and strive for a harmonious balance.  Increasing nature reserves and expanding existing sanctuaries would greatly help alleviate this issue.   An added benefit of an increase in nature reserves is it is beneficial for ecotourism.  While loss of habitat is a major threat, on the other hand living in the wild also presents threats towards the Blue Iguanas such as an issue of safety concerns.  Obviously, it is important that Blue Iguanas are released into the wild so they can live in the natural habitat and breed naturally, however their safety is imperative for their survival in the wild.  The Blue Iguanas are prey for unrestrained dogs and feral cats.  Unfortunately, in some instances, dogs and cats have found their way into the Botanic Park and have killed Blue Iguanas.  Incidents have also occurred in the other designated sanctuaries for Blue Iguanas.  Responsible pet ownership would help resolve or significantly reduce this threat against the Blues.  Blue Iguanas also fall victim to being hit by cars when crossing the road (as do green iguanas).  When visitors are leaving the Botanic Park they are asked to survey the area and check underneath their car to ensure no Blue Iguanas are hiding.

Another major issue the Blue Iguanas face in regard to their habitat is potentially having to compete for natural resources, especially food sources with the green iguanas.  At the moment, the green iguanas currently have not over populated the eastern side of the islands, where the major sanctuaries for Blue Iguanas are.  However, a large population of green iguanas potentially could move into the Blue’s territory and it would be very problematic.  The green iguanas are an invasive species (not endemic to the Cayman Islands) and threaten the survival of the Blues by posing the risk of taking over the vast majority of their natural habitat.  The escalated growth of the green iguana population has had a significant impact on the Blue Iguanas.  It has inadvertently contributed to sometimes giving Blue Iguanas a bad rep, as the green iguanas have caused a general dislike towards iguanas due to their menacing presence in the backyards of home owners.  The green iguanas have the ability to completely defoliate trees and shrubs which in the future could be problematic for the Blues when they are seeking food resources.   Moreover, there is a “maybe” possibility, of green iguanas harboring diseases which could be passed onto the Blues.  Whilst, there are no documented cases of this happening, it is still a thought to consider.  Furthermore,  there was an unexpected discovery of a hybrid hatchling in Little Cayman.  Through genetic analysis a female green iguana crossed with a male rock iguana.  Due to this unprecedented occurrence in Little Cayman, it raises concern that there is the potential for a hybrid to spawn from a cross between a green iguana and a Blue Iguana here in Grand Cayman.  Whilst, it may be unlikely of such an incident to occur, there is still a remote possibility.  Should a worse case scenario come into play where there are fertile hybrids between a green iguana and a blue iguana then that could result in the displacement of the endemic Blues by mass hybridization.

How To Help Protect Blue Iguanas

“The key is reducing the impacts from the threats that caused their near extinction in the first place.” – Fred Burton

The Blue Iguana Recovery Program has played a pivotal role in restoring the population of Blue Iguanas through their captive breeding program.  Now, a healthy population of Blue Iguanas have been released into the wild and natural reserves (protected areas) there is a strong focus on ensuring their safety in the wild. One of the main ways to help ensure the survival of the Blue Iguanas is to increase sanctuary areas.  The greater the amount of designated protected areas for Blue Iguanas helps to maintain a substantial amount of their natural habitat which is beneficial to both the Blue Iguanas and the environment.  When the Blue Iguanas are released into the wild, and protected sanctuaries it allows them to naturally breed and continue to play their crucial role in the ecosystem.  Overall, nature reserves and sanctuaries are great for ecotourism, as they provide a safe natural habitat for indigenous wildlife.

Pick up a copy of Fred Burton’s A Little Blue Book, available at the Botanic Park Gift Shop