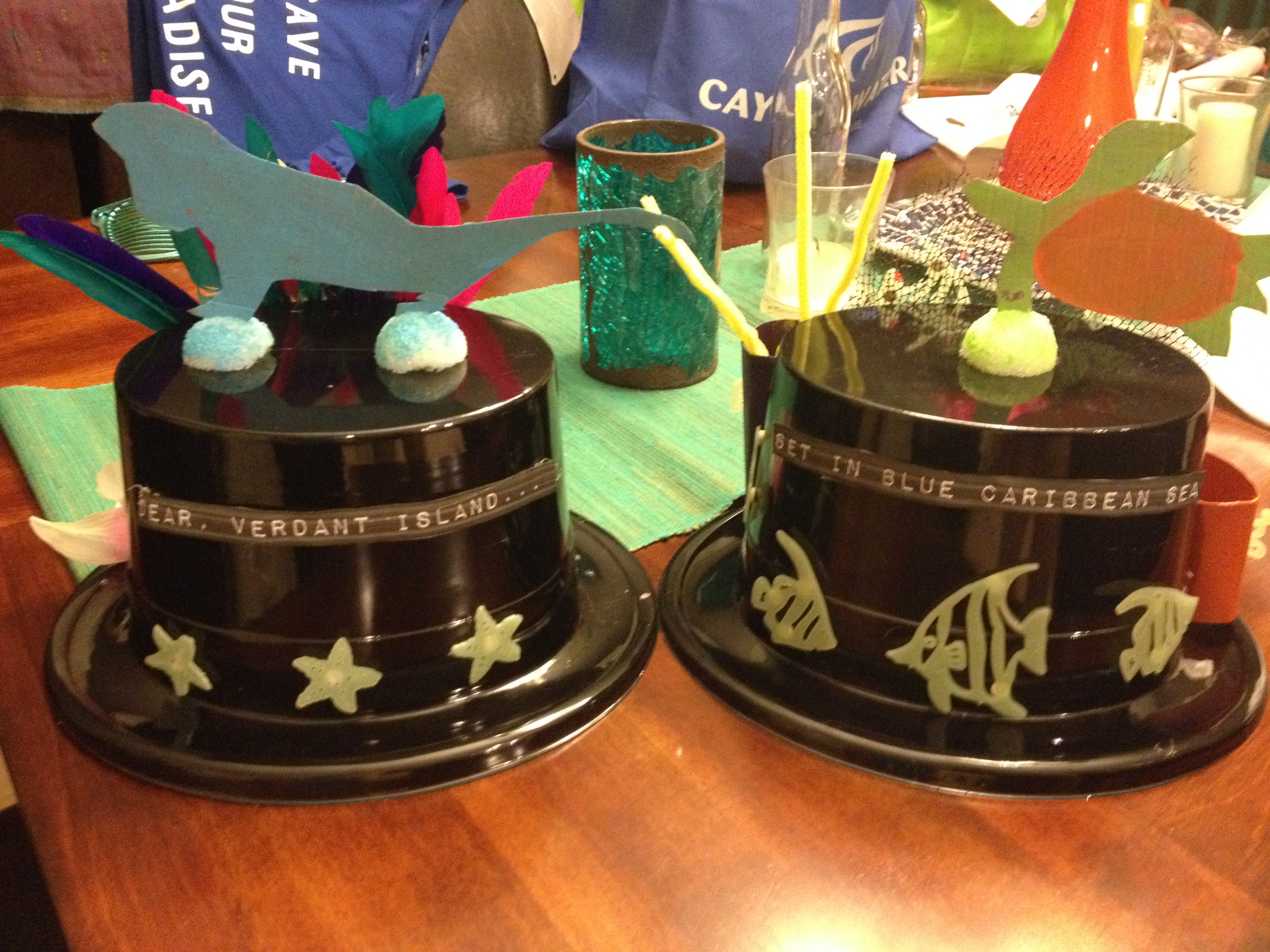 “Light up the night for a brighter future”

In the spirit of this fundraising event one of my bestie’s and I joined in with other participants creating funky glow costumes.  We made “Mad Hatter Hats” which of course, had an environmental theme.  One was nature themed, the other ocean themed.  In addition, we added some glow accessories, funky shades, and faux/synthetic feathered boas (which can be recycled for other events).

What you will need:

The Cayman Islands Blue Iguana was the mascot for this hat 🙂 Made out of cardboard, (repurposed pizza box). Written below the Blue Iguana, is lyrics from the Cayman Islands National Song “Dear Verdant Island.”  Some faux flowers were repurposed, an old postcard displaying old Cayman Style Houses, and faux/synthetic feathers were added to represent nature, and Cayman.  You guessed it, the 3 stars represent our 3 islands, Grand Cayman, Cayman Brac and Little Cayman.

I have to confess this was my favorite hat! Some months back, after a few hours of beach combing, I found a piece of sea fan, washed up on the shore, and repurposed it for this project by coating it in glow paint for the hat.  The coral barrels were made from toilet paper rolls, cut at different heights, and pipe cleaner used for the additional coral.  The turtle, was made out of cardboard (repurposed pizza box), also painted with glow paint.  Glow stickers of fish were added to help create a complete coral reef look.  On the opposite side of the hat, lyrics from our National Song “Set in deep blue Caribbean Sea” were pasted on.

Our Customize Glow T-shirts! These shirts were so simple, the hardest thing was lining up the letters.  A few packs of glow in the dark stickers, with an easy to use adhesive allowed us to create our shirts.  Old t-shirt repurposed to help raise awareness for the event, can still be used as the lettering easily comes off and can be reused again, thanks to the adhesive used on the stickers.

The 5k Glow Run, was awesome!! A great event raising awareness for protecting our paradise.

I had a blast making these Eco Mad Hatter Hats with one of my best friends, and walking the 5K Glow Run in support of the National Trust for the Cayman Islands.  Let all work together to protect our paradise.